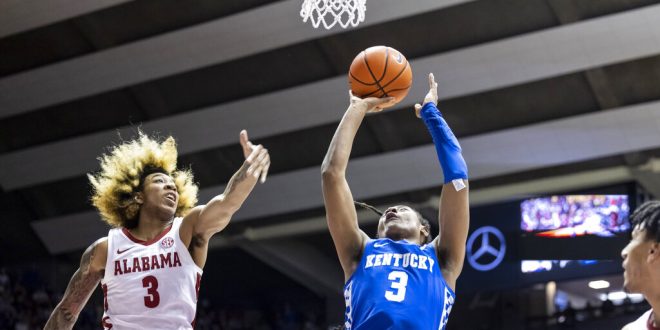 The No. 5 ranked Kentucky Wildcats head to Columbia to face-off against Frank Martin and the South Carolina Gamecocks. Kentucky is looking for their 20th win of the season, while the Gamecocks need to break a two-game losing streak.

The Gamecocks are coming into Tuesday’s game after capping off a two-game losing streak from last week. South Carolina lost an away game to Mississippi State, 78-64, and couldn’t come close to beating No. 19 ranked Tennessee at home, 81-57. Martin’s team has had an inconsistent season, winning against notable teams like Florida State and Texas A&M, but then losing to Princeton and Coastal Carolina.

The Wildcats are coming off a dominate week after beating Vanderbilt at home, 77-70, and Alabama in Tuscaloosa, 65-55. However, Kentucky has not beat the Gamecocks in Columbia since 2016.

As of now, the Gamecocks are shooting for 42% from the field and 32% from beyond the arc, scoring an average of 70.8 points per game. On paper, South Carolina looks like an offensive team to be reckoned with, but they are currently ranked 226th in the country for adjusted offensive efficiency. On the defensive end, the team ranks 34th on adjusted defense efficiency, making them sixth-best in the SEC.

For Kentucky, the team is slightly better when it comes to shooting on offense, making 48% from the field and 35% from beyond the arc. Kentucky is boasting a high adjusted offensive efficiency ranking, coming in at No. 5 in the country. It doesn’t get easier for Martin’s team as the Wildcats are ranked 11th on defense.

Senior guard Erik Stevenson has been leading the Gamecocks, averaging 11.3 points per game, shooting 36% from the field and 31% from three. Stevenson is also averaging 4.3 rebounds and 2.5 assists per game. James Reese, a graduate transfer guard from North Texas, is arguably South Carolina’s most efficient shooter. Reese is averaging 10.7 points on 42% shooting from the field and 37% from beyond the arc. A player that Kentucky needs to be aware of is junior guard Jermaine Couisnard. In 2020, Couisnard scored a career-high 26 points as well as a buzzer-beating three-pointer to shock the Wildcats 81-78.

On the Wildcats, junior forward Oscar Tshiebwe is having a breakout season after transferring from West Virginia, averaging 15.8 points and 15.2 rebounds per game. Tshiebwe is currently shooting 59% from the field and has not taken a three-pointer this season. Freshman guard TyTy Washington is the team’s most reliable shooter, averaging 12.9 points, shooting 48% from the field and 38% from three. Aside from the starting five, players including Davion Mintz and Daimion Collins had recent breakout games coming off the bench.