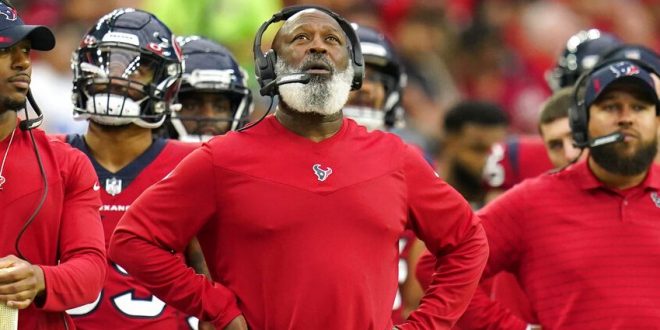 FILE - Houston Texans assistant head coach and defensive coordinator Lovie Smith, center, looks on from the sideline during an NFL football game against the Indianapolis Colts, Sunday, Dec. 5, 2021, in Houston. The Houston Texans are expected to hire current assistant Lovie Smith as their head coach, a person familiar with the process told The Associated Press. The person spoke to the AP on the condition of anonymity Monday, Feb. 7, 2022, because the team had not announced that Smith would be hired. (AP Photo/Matt Patterson, File)

The Houston Texans announced the hiring of Lovie Smith as their new head coach on Monday. Smith was the 2021 defensive coordinator for the Houston. He arose as a head coaching candidate late in the hiring process. Prior to the Texans, Smith served as head coach for the Chicago Bears, Tampa Bay Buccaneers, and the University of Illinois.

Smith replaces the Texans’ previous head coach, David Culley. The Texans went 4-13 under Culley, tying for the third worst record in the 2021-22 season. Culley was fired after a single season with the Texans, receiving $22 million for the remainder of his contract.

Smith carries an abundance of NFL experience to his new position. He spent 15 seasons as a coaching staff member in the league. The majority of Smith’s success came during his nine seasons with the Chicago Bears from 2004-2012. As head coach, Smith led the team to an 81-63 record and an appearance at Super Bowl XLI. Additionally, he led the Bears to three playoff appearances and was named NFL Coach of the Year in 2005. However, Chicago fired Smith in 2012 after the Bears missed the playoffs five times in six seasons.

Afterward, Smith served as Tampa Bay’s head coach from 2014-2015. His two seasons saw an 8-24 record. Smith then spent five years at Illinois, where he carried the team to a 17-34 record. He was fired in 2020 and went on to work under Culley as an assistant for the Texans.

Furthermore, Smith takes over the Texans after they posted the second-worst defense in the NFL last season. However, he plans to change the team’s defensive philosophy and build a stronger defensive line.

Recently, Flores filed a racial discrimination lawsuit against the NFL. He claims black candidates aren’t given equal coaching opportunities. Furthermore, Flores believes Houston did not hire him due to the lawsuit. Flores’ lawyers released a statement following Smith’s hiring:

Nonetheless, Lovie Smith assumes his position with the Texans beginning in the 2022 season.