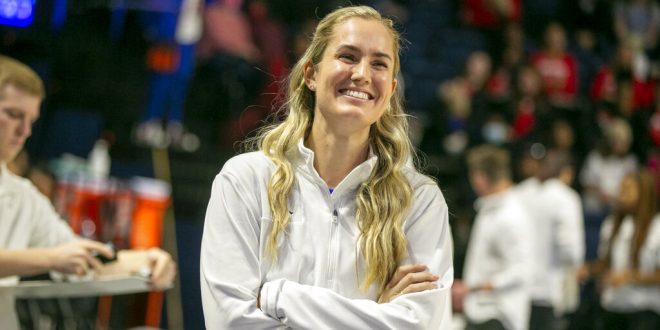 The Florida Gators Women’s has made their way into the Top 25 for the first time since 2016. The Lady Gators now sit at No. 19 in The Associated Press Top 25.  AP released their ranking Monday.

On Sunday Florida came out on top with an impressive win against Georgia, 54 to 51.

Florida got off to a slow start offensively, and led into the second quarter with a one point advantage of 9 to 8. Florida remained in the lead up until start of the fourth quarter. Here, Georgia led 42 to 38.

However, the Lady Gators were able to finish strong with the help of second-year Jordyn Merritt. Merritt put in 11 points in the match up and was one rebound away from a double double.

Former head coach Cam Newbauer led Florida women’s basketball for four seasons. During Newbauer’s four seasons the Lady Gators were 46-71. They were the only program at Florida without an SEC championship.

Newbauer was fired last summer due to physical, mental and racial abuse allegations from his players.

Kelly Rae Finley stepped in as associate head coach on an interim basis.

Finely has been praised on social media for her leadership with women’s basketball and ability to help the team make a comeback this season.

What Kelly Rae Finley has done with @GatorsWBK is one of the best stories in all of college basketball this year.

Not just women’s hoops. All of college hoops. Remarkable turnaround in Gainesville.

Florida women’s basketball is 17-6 and third in the SEC.

The Lady Gators will continue their road stretch Thursday where they look to play Mississippi State.