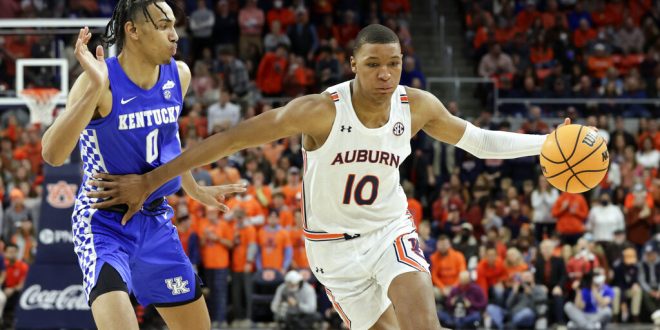 Auburn forward Jabari Smith (10) drives to the basket around Kentucky forward Jacob Toppin (0) during the second half of an NCAA college basketball game Saturday, Jan. 22, 2022, in Auburn, Ala. (AP Photo/Butch Dill)

Arkansas Basketball to Host No. 1 Auburn

The Auburn Tigers are the number one ranked team in college basketball for the third consecutive week. This is the first time in school history that they have been ranked No. 1. Now, Auburn must focus on their toughest road challenge since Alabama a few weeks ago. The Arkansas Razorbacks, who have an eight-game winning streak, will host the Tigers on Tuesday night for a huge SEC matchup.

Undefeated in the Conference

The Tigers currently hold a 22-1 record, with their only loss coming against the UConn Huskies back in November. Since then, the Tigers have won 19 games in a row and are undefeated (10-0) in the Southeastern Conference.

While Auburn clearly has a great chance of another road win, this will possibly be one of their toughest games this season. The Arkansas fanbase has announced that the game will be a white-out at home, and they will definitely bring the energy. The Bud Walton Arena had 18,900 attendees at one point this season.

The Razorbacks lost their first three SEC games but since then, have won eight in a row. Arkansas is 18-5 overall with a 7-3 conference record.

The Razorbacks have only allowed an average of 60.5 points per game, making their defense one of their strongest forces. In addition, Arkansas averages 8.5 steals per game They have contained opponents to 38.1% shooting from the field (167-for-438) and 28% shooting outside the arc (44-for-157).

When the Razorbacks defeated LSU, they were trailing 56-48 with nine minutes remaining before coming back with a 17-2 run.

In their last game against Mississippi State, the Razorbacks were ahead by four points with a little over 30 seconds remaining. They could have held the ball until the clock ran out, but Chris Lykes had a different option in mind. Lykes drained a three, solidifying their win over the Bulldogs and furthering their win-streak to eight games.

Can Auburn Hold On?

The Tigers barely scraped by a massive upset loss to the Georgia Bulldogs on Saturday. This game showed that Auburn is not a completely a dominant team, considering the fact that Georgia is 1-9 in the SEC and ranked last. The Tigers pulled off a 74-72 win after a layup from Wendell Green to give Auburn a lead with five seconds remaining.

Despite their win streak, Arkansas still has yet to make the AP Poll Top 25. Head coach Eric Musselman is determined to change that as this Arkansas team is pushing forward this season. Some say that Auburn looks tired and might let up their first SEC loss.