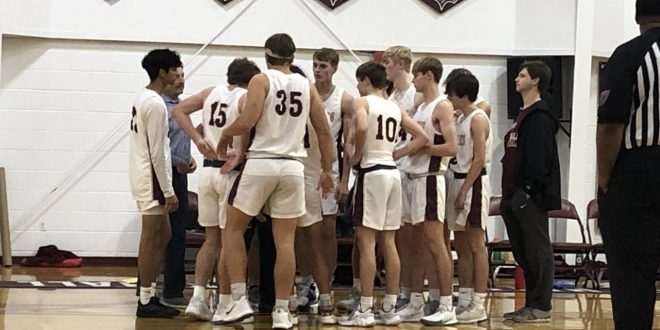 Oak Hall Moves on to Its Next Playoff Game

The Oak Hall Eagles are started their postseason with a quarterfinal matchup against the Countryside Christian Minutemen. After battling it out, the Eagles moved on with a 74-45 victory over the Minutemen. Senior Mike Moreschi finished with 25 points, and Sophmore Andrew Powell finished with 29 points. Although Oak Hall accomplished what they set out to do, Head Coach Monte Towe said he believes they need to play much better to win their next game on Feb 9.

One quarter remaining, and the Eagles are closing in on the victory. They lead the Minutemen 53-36. Moreschi’s and Powell’s offensive performances have been the key to Oak Hall’s success tonight. pic.twitter.com/YByCUP4kqg

Success Does Not Mean Perfection

Although they finished the night off with a victory, there are still parts of the game the team needs to improve on.

“I didn’t think we played as well as we could have, but we did what we were supposed to do,” said Head Coach Monte Towe. “One of the reasons we didn’t play well as our opposition, I thought they did a good job of guarding us.”

Countryside Christian was outrebounding Oak Hall, especially in the first quarter. Rebounding has been an issue for the team on the offensive side throughout most of the year. Coach Towe explained how they need to rebound as a team and not just rely on one or two players to do it for them, specifically on the defensive board.

Moreschi and Powell Lead the Team

Moreschi and Powell had a spectacular game on the offensive side. Powell scored 29 points by the end of the game and Moreschi had25 points.

Throughout the match, Moreschi defaulted to an aggressive tactic through the middle. Moreschi explained that the team does well under transition. He would get the ball in the wing and push on transition. If he saw any members of his team open, he would pass it over. If not, he would take the shot himself.

A big part of the offense in this game was a fast break attack plan, which Moreschi aided in. He explained that his plan involved “pushing the ball and finding wide-open people and going after a person specifically and attacking them to get past them a lot easier.”

Powell opened up dominating the game, scoring 16 points in the first eight minutes.

“I was getting open easily, they were playing just a zone, and that made it super simple to just get the ball and shoot,” he said.

But the Minutemen quickly adapted their defensive strategy after the first half of the game. They switched to a box-in-one defense to try and prevent Powell from getting the ball.

Throughout the game, Countryside went for the three-point shot a good amount of times. The team had to adjust on defense in response to the longer shots.

“Since it was longer shots that means it’s longer rebounds,” Powell said. “So we really had to make sure the guards were farther out defending, make sure they were also rebounding.”

“Cause the big guys, they’ll box out down low, but the ball would go in way over our heads. So the guards had to step in and help out with that.”

The Eagles are now traveling to St. Augustine to face University Christian on Feb. 9 at 5 p.m. Only one game away from the championships, the team is bound to play harder than ever. Both the players and coaches learned from their experience against the Countryside Christian Minutemen and are planning to apply corrections in their upcoming match-up.

“We have to go up there and let it out. Play as hard as we can and play with a lot of effort and intensity,” said Towe.

@_vanessa_sanch
Previous Arkansas upsets No. 1 Auburn in Overtime
Next Vanderbilt Triumphant Over Missouri at Home