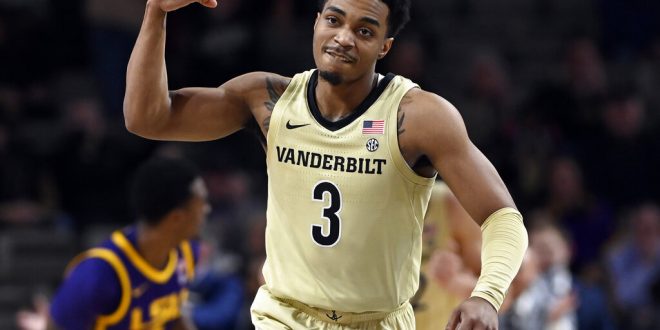 Vanderbilt guard Rodney Chatman (3) celebrates after making a 3-point basket against LSU during the second half of an NCAA college basketball game Saturday, Feb. 5, 2022, in Nashville, Tenn. (AP Photo/Mark Zaleski)

Vanderbilt Triumphant Over Missouri at Home

The offensive showing in this game was not at its best for either team, which isn’t new. Vanderbilt came into this game ranked No. 12 (69.0) in the league in points per game, while Missouri came in dead last at No. 14 (66.1).

Missouri’s offense couldn’t find its way against Vanderbilt. The Tigers shot just 41% from the field. Additionally, they shot 20% from behind the arc, making only five of their 25 attempted threes. Another major area that hurt the Tigers in this game was free throws. The Tigers attempted only 12 total free throws, which they only netted seven. The Tigers were led in scoring by senior guard Javon Pickett off the bench. Pickett had 15 points, one assist and two rebounds in 26 minutes against the Commodores.

The host of Tuesday’s game, the Vanderbilt Commodores, kept up their season pace in scoring. A major boost for Vanderbilt came from its starters.

All five starters scored in double digits with a high of 19 coming from junior Scottie Pippen Jr. Again, maybe not the most efficient night for the Commodores, but they managed to come out on top over the Tigers. Vanderbilt shot 42.2% from the field, which was barely better than Missouri. However, Vanderbilt made its money behind its threes and free throws made. It shot 44.4% from behind the three-point line and made eight total threes. Also, it sunk 24 of its 35 free throws attempts. This difference in free throws made led the Commodores to their victory.

Pippen Jr. ended the night with 19 points, four assists, one rebound and three steals. He also did this on good shooting efficiency. Pippen Jr. was 6-13 from the field and 2-4 from three. Also, he added five free throws on the night.

Pippen Jr. is the known leader for this team and it was no different against Missouri. Whether he is called up on for the big shot or getting other open for easy scores, Pippen Jr. looked comfortable on the court at all times.

Vanderbilt has now won its last two games and hopes to further it on Saturday against in-state rivals Tennessee. After this game, it will make its way down to Auburn to face off against the No. 2 ranked Tigers.

Missouri will be starting a two game home stretch for this next week. It will begin with Ole Miss at home on Saturday hoping to get back on track. Next, the Tigers will face off against Arkansas Tuesday before traveling to Starkville to take on Mississippi State Friday.