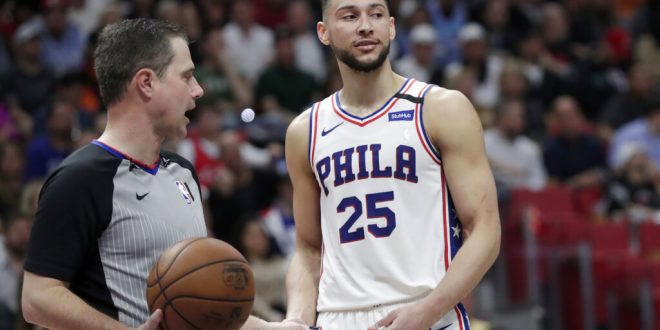 Philadelphia 76ers guard Ben Simmons (25) talks with David Guthrie, left, during the second half of an NBA basketball game against the Miami Heat, Monday, Feb. 3, 2020, in Miami. The Heat won 137-106. (AP Photo/Lynne Sladky)

The NBA trade deadline ended with a boom as NBA fans were granted the highly-anticipated trade they’ve desired.

After sitting out since the start of the season, Ben Simmons is on his way to the Brooklyn Nets.

In a blockbuster trade that sent a discontent James Harden to Philadelphia, Ben Simmons will no longer have to play in front of a brutal Philadelphia fan base.

After last years playoff blunder, Simmons received countless hatred from fans and hasn’t played a game for Philadelphia since.

Simmons expressed his frustration with Philadelphia’s fan base and organization, resulting in the proposed trade.

James Harden and Ben Simmons headline the blockbuster trade, but the trade also led to the swap of some key assets.

On the other hand, the 76ers will receive veteran Paul Millsap along with Harden.

With the Nets currently sitting in the eight seed, the addition of Simmons should increase their chances at a deep playoff run.

Furthermore, the addition of Harden to a 76ers squad, should boost Philadelphia’s playoff positioning.

Philadelphia has been playing without Simmons all year and should be much better off with Harden at the helm.

On paper, it looks like the Nets have won the trade but only time will tell.

In a surprising deadline trade, big man Kristaps Porzingis has been traded to the Washington Wizards.

In return for Porzingis and a second round pick, the Dallas Mavericks will receive Spencer Dinwiddie and Davis Bertans.

After being traded to the Mavs from the Knicks, Porzingis was expected to be a matchup nightmare alongside Luka Doncic.

Now with Porzingis in Washington and Dinwiddie and Bertans in Dallas, the Mavs have more depth and shooting surrounding Luka, while Porzingis should help spread the floor in Washington.

Other notable trades around the NBA

While these trades may not be as big as the two mentioned before, players such as Harrell, White, Craig, and Schroder should make impacts on their new team.

The addition of White to the Celtics adds a much needed shooter for the C’s off the bench.

On the other hand, the Torrey Craig trade strengthens a Sun’s defense that was already pretty stout.

With the deadline ending at 3 p.m. today, every team is set to make their potential championship run when the playoffs roll around in April.

Previous Eastside Rams Clinch a Spot at the Regional Semifinals in 3-2 Victory Against the Suwannee Bulldogs
Next MBK Preview: Arkansas Travels to Alabama