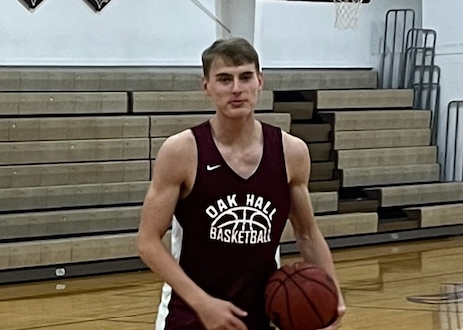 Andrew Powell is not your typical high school sophomore. Sure, he enjoys hanging out with friends, playing the occasional racing video game and listening to Lil Baby. But Powell can boast something that virtually no one else his age can. Not only does he play for his school’s varsity basketball team as a sophomore, but he has quickly emerged as one of their stars. In the past two years, Powell has gone from just another kid at a JV tryout to leading the Eagles to a District Championship appearance. He has accomplished a lot so far, but he is just getting started.

Talent in his Genes

Powell grew up with a direct connection to the game of basketball. His father played for Eckerd College, and it appears that his love for the sport rubbed off on Powell.

“At a very young age, [my dad] introduced me to basketball,” Powell said. “I would say probably say around… age 2-3, I started shooting and getting the feel for things.”

Andrew Powell talking about his early connection to the game of basketball through his father. pic.twitter.com/XHg9Yd45Qs

Powell played for his fair share of rec league teams and a few AAU teams before entering high school. He attended a JV tryout in his freshman year, hoping to snag a roster spot. Little did he (or anyone in that gym) know the Eagles were about to find one of their most promising prospects.

A Diamond in the Rough

Powell’s career with Oak Hall started off with a bang. Unknown to the coaching staff at the start, he caught the eye of Assistant Coach David Stirt as the tryout went on.

“He shows up in the gym during JV tryouts, and they do some up-and-down the court layups. He’s going up and down the court left-handed, right-handed, making them. I went ‘Hey, this guy’s 6’3 and he’s moving pretty well,'” Stirt said. “Then they do some shooting, they shoot some 15-footers around the block, and he makes like 13 out of 15. I said, ‘Whoa, he’s got a nice shot.’ Then they move them out to the three-point line, all the kids, and he sinks his first five three-pointers.”

Powell’s performance at the tryout had impressed Stirt so much that he believed the freshman was already beyond the JV level.

“Coach Towe wasn’t there right away… when he showed up, I said, ‘Coach, I think we found a varsity player for you,'” Stirt said.

After landing on the Eagles varsity squad, Powell quickly established himself in the team’s rotation. Despite only being a freshman, Powell got plenty of action all season long. As one of the new guys, he took advantage of whatever opportunities he was given to improve his game and help the team.

“I kind of realized [my potential] in the second or third game last year when coach [Towe] started me,” Powell said. “It started off just from me taking the role as the 3-point shooter.”

Putting the Work In

According to his MaxPreps profile, Powell averaged 12.1 points per game on 42% shooting from the field as a freshman. He also converted on an impressive 44% of his three-point attempts that season. However, he wanted to take another step in advancing his game to become more multi-dimensional. This is where Powell’s dedication to his craft came into play.

“This stuff didn’t happen by accident, he’s a hard worker,” Head Coach Monte Towe said. “He’s probably the hardest working kid that I’ve had at Oak Hall in his offseason workouts. He’s been a real pleasure to work with.”

Powell’s work ethic has been a key factor in his success with Oak Hall. Even when he’s not busy with school or the team, he still finds ways to put in work to get stronger.

“Me and my brother, we work out a lot, lift weights,” Powell said. “[We go] running sometimes. It’s all kind of stuff for basketball and just sports in general.” He also listed mountain bicycling as another activity he takes up in his free time.

Powell also derives some motivation from his relationship with his younger brother Grant. With a one-year difference between them, the brothers maintain a healthy level of competition to bring out the best in each other.

“[Our relationship] is mostly competition, just trying to be better than the other, like a 1-on-1 at the house,” Grant said. “But I definitely look up to him as well… I ask questions about basketball and how I can be better.”

Entering the season, the team had high hopes for Powell. With Matthew McKinney, the team’s previous star player, having graduated over the summer, the team needed a new go-to guy. Powell quickly stepped up and established himself as an all-around threat for the Eagles. Powell has led the team in points (17.9), rebounds (6.4) and blocks (1.1) per game this season.

While he has only shot 35% from three, he has maintained a steady hand from the rest of the floor. He has converted on 41% of his field-goal attempts this year. One area Powell has grown in substantially is his off-the-ball movement. His ability to find openings in the defense allows him to find more open shots. He has also excelled in navigating through defenders on his cuts to the rim, thus increasing the efficiency of his inside shots. His crisp movement on the offensive end can be seen in the clip below.

Following a stellar second quarter, the Eagles have narrowed their deficit to 5 as they trail the Lions 23-28. The Eagles have improved their on-and-off the ball movement throughout the game, as shown in this play by sophomore Andrew Powell. pic.twitter.com/1TuUEfozag

While he has established himself as an up-and-coming star, Powell still has room for improvement in multiple areas. Assistant Coach Stirt noted that Powell has been working on his ball-handling and physicality.

Stirt also mentioned that Powell “doesn’t give players enough trouble defensively”. The assistant coach noted that while Powell has shown promise on the defensive end (with 1.1 blocks per game and 0.9 steals per game), he sometimes has trouble staying in front of his opponents. Stirt still expressed plenty of enthusiasm for Powell’s future considering how he has a lot of room for growth at his age.

“He’s still a very young basketball player, and that is what makes it so exciting with him,” Stirt said. “He has so much room for growth, and he’s willing to put in the time to get better.”

A Bright Future Ahead

The Eagles have had a stellar season to this point. With a 14-6 record, they recently clinched a berth in the 2A District 4 championship. While the team will hope to keep their postseason going for as long as possible, Powell still has a lot to look forward to after this season. He will have two more seasons with Oak Hall to continue polishing his play before heading off to college. Powell hopes to play collegiate basketball, and his sights are set high.

“It’s definitely a lofty goal, but I would really like to play for Duke,” Powell said. “I’ve been to their camp four years, I want to say. When you go there, it’s just something special.”

No matter how this season ends, Powell has expressed appreciation for his teammates and their roles in the team’s success.

“Mike [Moreschi], he distributes the ball very well, so anybody gets the ball from Mike a lot… same with Jackson [Beach], actually,” Powell said. “It’s great to have guys like that on your team. That’s just a part of a winning team, you have to have… guys that are unselfish like that.”

With the strong chemistry between their players, and with Powell leading the charge, the sky is the limit for the Oak Hall basketball program. As they wrap up a successful season with their star returning next year, it is safe to say they will be set for a long time.

Jack Meyer is a second-year student at the University of Florida. He is majoring in Journalism and specializing in Sports and Media.
@jackmeyerespn
Previous Gators Women’s Basketball Continue To Roll as They Defeat Mississippi State 73-64
Next SEC Announces Revenue Distribution