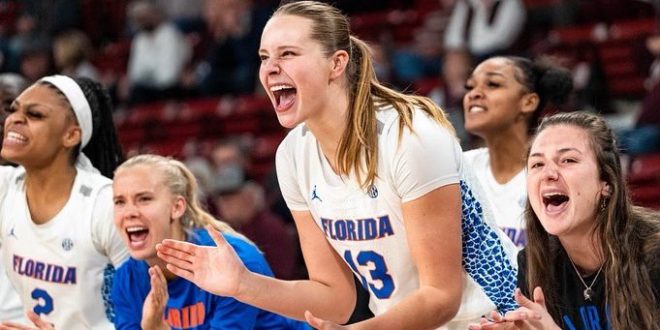 The Florida Women’s Basketball team (18-6, 8-3) looks to extend their win streak to four tonight as they travel to Auburn (9-13, 1-10). The Gators are coming off of an exciting road win against Mississippi State on Feb. 10. The Gators beat Mississippi State 73-64 for the first time since 2013. The Auburn Tigers are coming off of a loss to Arkansas 68-66.

The last meeting between Florida and Auburn on January 13th, the Gators won in a close game 68-63. Graduate student Kiara Smith finished with 19 points, three rebounds, three assists, and two steals. Freshman Alberte Rimdal had a career high that came with 14 points. Despite the win, the Gators shot just 37.7% from the field but ended the night 20-23 (87%) from the free-throw line. The Gators trail Auburn 37-25 in the all-time series, but have claimed the last four matchups.

The Gators have consistently improved their game weekly. For the first time in program history, Florida has defeated Kentucky, Mississippi State, LSU, Tennessee and Georgia in the same season. UF has now has conference win No. 8 of the season with five being on the road.

Interim head coach Kelly Rae Finley said “her team is selfless, and they’re caring, but they are fierce competitors.” The Gators have shown their competitiveness throughout the season as they recently have climbed into the Top 25 rankings coming in at No.19.

Graduate student Smith has been outstanding for the Gators this season. Smith now has 408 career assists, as she passes former Florida head coach Amanda Butler for No. 6 in school history.

Florida tips-off with Auburn at 7 p.m. in the plains. Listen along on WRUF for live coverage beginning at 6:45 p.m.

The Gators will return home Thursday to host Arkansas in an SEC matchup. Game time is set for 6pm in the Exactech Arena at the Stephen C. O’Connell Center.