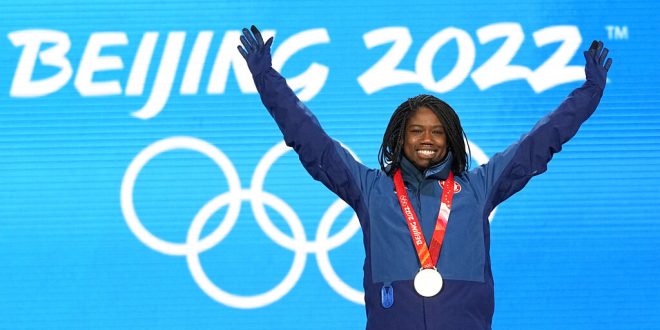 Gold Medalist Erin Jackson of the United States celebrates during the medal ceremony for the speedskating women's 500-meter race at the 2022 Winter Olympics, Monday, Feb. 14, 2022, in Beijing. (AP Photo/Sue Ogrocki)

Remember the name. @ErinJackson480 is the first Black woman to win an individual medal in speedskating at the #WinterOlympics. pic.twitter.com/y63kWGHE1k

Jackson’s journey to the Olympics

Speedskating was not always her event. She used to be an inline skater, but switched to ice skating prior to the 2018 Olympic games. Four months after taking on speedskating, Jackson became the first Black woman to qualify for the U.S. speedskating team back in 2018. Now, she joins Brittany Bowe and Joey Mantia as the only Ocala natives competing in this year’s Olympics.

Although she was ranked No. 1 in the world in the 500-meter event, her historic run almost didn’t happen. In her Olympic trial last month, Jackson stumbled which led to her not qualifying for the event. Bowe, who is also an Ocala native, managed to qualify for the event but granted Jackson the spot to make sure she would be able to compete on the big stage at the 2022 Winter Olympics. Jackson’s teammate Mantia had this to say about Bowe’s incredible act of kindness;

“All things considered, to give up an opportunity for a medal is insane,” he said. “What she did was absolutely crazy. I think it’s an amazing gesture that she was able to bring herself to do, and not knowing for sure if she was going to get that spot or not because our criteria for how we get spots is a little open-ended up until the last minute.”

Bowe was later granted a spot in the event due to relocation and finished No. 16.

Jackson will now return home a world champion. The Olympics will continue as the closing ceremony is Feb. 20. Jackson has now closed out a historic year for her sport and for her legacy. It is unclear at the moment if the 29-year-old Olympian will compete again in the 2026 Games.