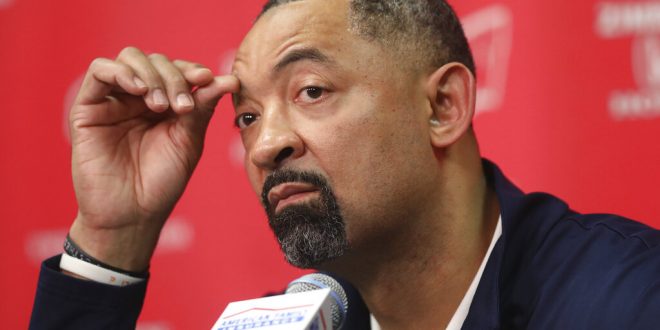 Michigan head coach Juwan Howard speaks to the media regarding a fight that broke out on the court after an NCAA college basketball game against Wisconsin in Madison, Wis., Sunday, Feb. 20, 2022. (Amber Arnold/Wisconsin State Journal via AP)

A historic Big 10 rivalry intensified Sunday at the Kohl Center.

Michigan basketball coach Juwan Howard was visibly upset in the postgame handshake line. Following a 77-63 loss to Wisconsin, Howard flew through the handshake line with his sites set on leaving. But, then he saw Greg Gard.

The two coaches engage in a heated verbal exchange, drawing attention from both teams and coaching staffs. As a crowd began to gather, Howard swung at Wisconsin assistant coach Joe Krabbenhoft.

A fight broke out between Michigan and Wisconsin during the postgame handshake line. pic.twitter.com/AiWIwyzj8w

After the game, Howard explains his grievance fueled by in-game decision making.

Significantly, he also explains how the verbal altercation became physical.

Gard also gave his story of the interaction. With his team up in the second half, he wanted to let his bench players play the final minute. As the players were taking the floor, Michigan set into a full-court press. Notably, a timeout by Wisconsin would reset the game clock.

Gard, making a coaching decision best for his players, did not think the timeout was poor gamesmanship. Surely, he later explains the interaction with Howard and what took place on the court during their exchange.

The status of Howard and possible suspension is currently undecided. Certainly, he understands whatever punishment necessary.

Howard, an alumni of the University of Michigan, and member of the historic “Fab Five” is in his third season as head coach of the Wolverines. Prominently, time will tell what decision is made regarding his future.

“The Big Ten Conference is aware of a physical altercation involving Michigan Head Coach Juwan Howard at the conclusion of the Michigan Wolverines and Wisconsin Badgers men’s basketball game. The conference is in contact with both member institutions and is currently assessing the incident. The conference will provide more information and will take swift and appropriate disciplinary action when it completes its review.” 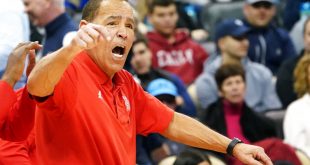 With the Sweet 16 beginning Thursday, the NCAA Men’s Tournament has been madness. With upsets …