Hawthorne Coach Greg Bowie has his team in the regional final against Trenton.  On the Sportscene with Steve Russell sports show, he said he just wants to win and advance.

Reflecting on Hawthorne’s last game Bowie said the boys played a “pretty good game,” he did say that the offense needed some improvement.

Hawthorne has played Trenton before in district championships but it has been awhile since that has happened.  Bowie does recognize that Trenton has been playing great ball. “They have kids who are attacking the basket well, playing great as a team,” said Bowie. He said the boys will have to push up on their shooters and limit their shots.

Trenton’s defense is set up as a two-three zone and Bowie said the team rotates well and they are in their position in the zone.

Bowie said that the team is going to need the home crowd to show up big in support of the team. As for the team, they will need to hit some shots to get Trenton out of that two-three zone.

Santa Fe coach Glen Banks also appeared on Sportscene to talk about his regional match up.  Reflecting on their past game against Gadsden County (66-41) Banks said the Raiders “played one of the best games all season.”

Banks said there has been a shift in focus going into regionals “they boys are locked in.” Banks talks about how Andrew Jackson has been playing this season and the team as a whole.

Santa Fe has playoff experience after a deep run last year and Banks says they have plenty of respect for Andrew Jackson, a team with lots of talent and that his team has watched tape to see what Jackson’ tendencies might be.

Banks adds his team has cleaned up its defense, the rotations have gotten better and it finally clicked last game. He talks about what the team needs to do in order to win this game tonight. 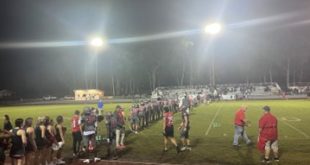