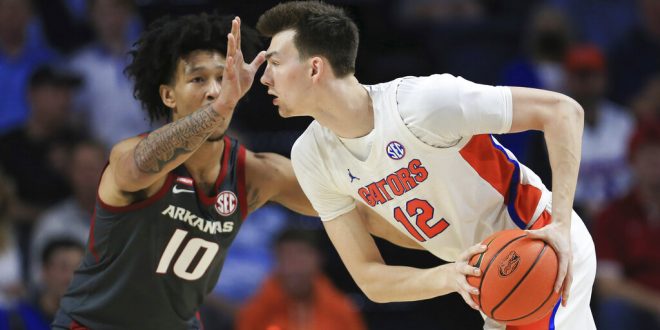 The Florida Gators were unable to follow up their big win over Auburn on Saturday, falling to the Arkansas Razorbacks at home 82-74. The loss drops Florida to 17-11 and 7-8 in conference play. It also puts Florida right back on the bubble after their loss to Auburn seemed to take them off of it.

It was the Colin Castleton show for Florida as he had 29 on 10-16 shooting. Arkansas was extremely physical with him in the paint, fouling him 11 times. However, the Deland native was up to the task as he shot 9-10 from the line.

One department the Razorbacks did a good job in limiting Castleton in was rebounding. He grabbed just six boards on the night, and only two on the offensive glass.

“We did a horrible job on the glass as a team,” Castleton said.

The difference in the end was shot making for the Razorbacks. They finished with five players in double figures, while the Gators had just two. Arkansas finished the game shooting 46% from the field and 39% from three.

Florida pulled it within one with 1:26 left, but Arkansas finished the game on a 10-3 run to close it out.

Back And Forth Early

The Gators started hot from deep, hitting all four of their first attempts. Tyree Appleby picked up where he left off after scoring 26 against Auburn and made his first two attempts from three. He finished with a very important 19 points on the night.

The teams went back and forth in the first half, as the Gators got out to the early lead 12-4. Arkansas then reeled off a 14-2 run to take an 18-14 lead. However, the Gators would bounce back with a couple more threes and the game sat tied at 23 with 6:54 remaining.

Each team had an answer every time a team began pulling ahead and offense was the theme early. The Gators were 7-16 from three in the first half, while Arkansas shot 48% from the field.

The Razorbacks stretched the lead to as big as six, but at the half led by just three, 37-34.

The back-and-forth nature of the game continued early in the second half. Arkansas got out to a 43-38 lead, but Colin Castleton answered to tie the game at 43.

Niels Lane gave Florida the lead at 46-44, then Phlandrous Fleming Jr. nailed a mid-range jumper that got Florida out to a four-point lead.

Every time it seemed a team had any breathing room, the other was right there with an answer. Both teams played physical and made tough shots right when their teams needed it.

However, the Hogs would get the final say.

After Castleton got it back within a point at 72-71, Arkansas nailed a three to get the lead back to four. It was the story of the night as the Razorbacks finished the game on a 28-14 run following Florida taking a six-point lead with 7:52 left.

Arkansas hit some late free throws and that was all she wrote. The dagger was a Davonte Davis fast break dunk, in which he pulled himself up and slapped the backboard.

The Gators now turn their attention to another important matchup against Georgia in Athens on Saturday. Tipoff is at noon and coverage will begin at 11:25 a.m.