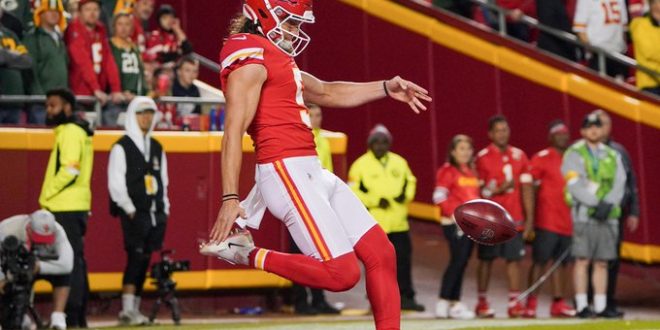 Former Gators punter boots one from his own end zone during a game with the Kansas City Chiefs. Townsend was in attendance for the inaugural Steve Spurrier First-Year Coach Awards in Gainesville on Monday, Feb. 22. Photo Credit via Twitter @GatorsFB

Punter Tommy Townsend, a former Florida football player, has been playing for the Kansas City Chiefs for the past two years. After having a terrific 2021 regular season, ending it 12-5, they fell short in the post season against the Cincinnati Bengals.

The Chiefs had two consecutive wins against the Pittsburg Steelers and the Buffalo Bills in January. On Jan 30, they faced the Bengals for the second time in the 2021 season. Through the first two quarters, the Chiefs dominated the field and led the Bengals 21-10. Cincinnati fought back and improved their defense in order to go to overtime, where the Chiefs lost 27-24.

Relationship with the Team and Patrick Mahomes

Looking back at his professional football career, Townsend has only positive things to say about his team. The Chiefs have had outstanding regular season for the past two season with Townsend. With their all-star unit, he is ready for another great season with the Chiefs.

When talking about star players in the team, Patrick Mahomes is one of the first names to come to mind. The quarterback has played for the Chiefs for the past five years and has proven to play a pivotal role on and off the field. After a disappointing start to the post season, Mahomes has got right back to training in preparations for the 2022 season. Townsend shares his thoughts about Mahomes as not only a player but a person off the field.

Thoughts on the Head Coach

The Kansas City Chiefs have had Andy Reid as their head coach since being hired in 2013. As an NFL head coach, he has an impressive resume. Including leading the Chiefs to the championships and having a come-from-behind win in Super Bowl LIV. Tommy Townsend praised his coaches work ethic, mentioning how he is always in the office working nonstop for his teams success.

Punting is not the most glorious position on the team, but Townsend makes it enjoyable for himself. He makes the position a lot more fun than it is thrown out to be. The main method he uses is just celebrating with his team. Whenever his teammates would make big plays downfield, he would run down field and celebrate with them.

Alongside his brother Johnny Townsend, they both had successful careers with the Gators punting. Tommy Townsend shares how his brother got into punting during his time at high school and how that effected his decision to join him.

The Future of the Gator Football Program

Just because Townsend is playing professionally does not mean his ties with the Gator nation is severed. During his time in the football program, he also played as a punter alongside his brother Johnny Townsend for 2016 and 2017. He has had a successful career with the Gators, currently holding the school record for most yards by a punter in a single game (432 yds., 9 punts) and the seventh-longest punt (71 yds.). Both brothers have show their support for the program since they left.

With Billy Napier being appointed the new head coach, the future of the football program is looking bright. Tommy Townsend is excited to see what Napier will bring to the table.