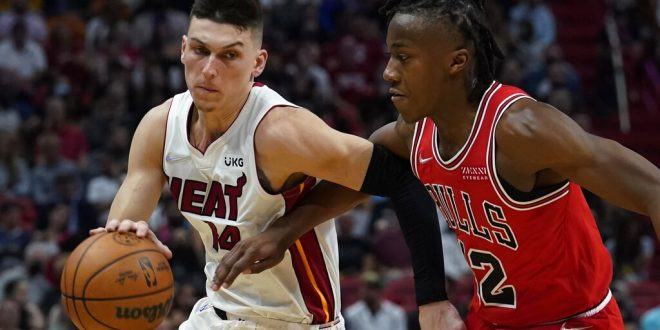 The Miami Heat handled the Chicago Bulls 112-99 in last nights game. The Heat are 41-21 in the season and the Bulls are 39-23 in the season. The Heat now have a lead of 3-0 lead in the season series against the Bulls. Chicago has an away record of 15-14 and the Heat improve their home record to 21-7.

Chicago started off slow and were not able to gain enough momentum to form a comeback against Miami. For a Bulls team that has aspirations to be the East’s No. 1 seed, Monday’s result is not a favorable one. Chicago is now two games behind Miami in the East with the Heat holding the tiebreaker.

Tyler Herro and Gabe Vincent made their mark in the game putting up 20 points each. The win pushed Miami to 9-1 in their last 10 games and are winners of four straight.

Potential MVP candidate DeMar DeRozan scored 18 points om 7-16 shooting to go along with three assists and seven rebounds. This is a credit to the Miami Heat defense that contained DeRozan to his lowest scoring night since Feb. 3. Before the matchup with the Heat, DeRozan scored at least 28 points in every game in February and scored at least 30 in 10 straight.

As with many of their wins, the Heat used a balanced effort in their game. Jimmy Butler scored 15 points in the game with four assists and seven rebounds. he also guarded DeRozan on several possessions throughout the win. At his side, Tyler Herro recorded 20 points this game to go along with five assists and six rebounds.

Gabe Vincent started in place of Kyle Lowry, who was out with personal reasons, and Vincent made the most of it. He scored 20 points while also dishing out three assists and grabbed a couple rebounds. “When the opportunity comes you want to take advantage of it,” mentioned Vincent. Bam Adebayo, playing center but guarding, multiple positions in this one, scored 15 points this game, with five assists and seven rebounds.

Next up for the Heat, they go through an important stretch of their schedule taking on arguably the best teams in the East. They’re on the road Wednesday for a matchup with the Milwaukee Bucks, on Thursday for a game with the Brooklyn Nets and then return home for a showdown with the Philadelphia 76ers on March 5. As for the Bulls, they take on the Atlanta Hawks on the Road Wednesday after dropping their last two games.