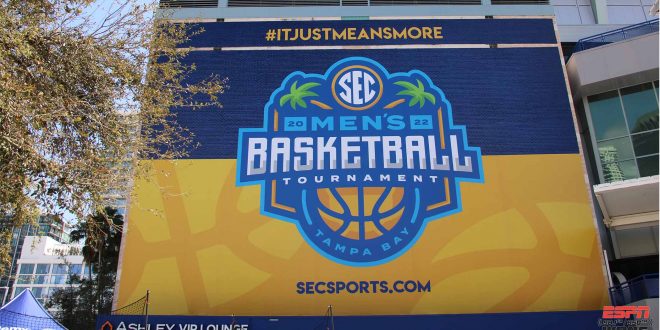 The Florida Gators Men’s basketball team has their sights on Texas A&M in a pivotal matchup. This will have major influence on if the Gators receive a bid to the NCAA Tournament. The Orange and Blue are set to take the Aggies in the second round of the SEC Men’s Basketball Tournament.

Also, Thursday’s matchup against the Aggies is a big showdown for both programs. For Florida, according to ESPN’s Joe Lunardi recent bracketology projections, the Gators, as it stands now, are listed in the next four out. This means Florida will not be dancing with selection Sunday on March 13th, at the moment.

A Must Win for Coach White and the Gators

However, there is a path where Florida can extend their season after the SEC tournament.

What is the Gators path to the tourney, you may ask? It’s quite simple, take advantage of home court. Just a two hour commute, expect a sea of Gator faithfuls at Amelia Arena in Tampa, FL to show out during the duration of the tournament. In every matchup, Florida should have the upper-hand in fan attendance, especially against the Aggies.

Forward Anthony Duruji says the love and support of Gators fans in attendance will give them more and more confidence.

Although, on the road, Florida showed some promising signs that may play a factor in them advancing to quarterfinals. Colin Castleton had a near career rebounding night with 15 to go along with his 15 points. For the game, the Gators had a total of 20 offensive rebounds, seven going to Castleton.

On the defensive side, the Orange and Blue held the Aggies to a poor shooting night. The Aggies shot 2-for-18 from the three-point range and was hesitant to enter the teeth of the Gators defense as Florida tallied five blocks.

Duruji said the Gators need to show that same level of intensity and focus if they hope to advance.

Now, expect Duruji and Castleton to earn more touches and in the paint and crash the board on the Thursday as the winner of this matchup is expected to take on top-seed Auburn in the quarterfinals.