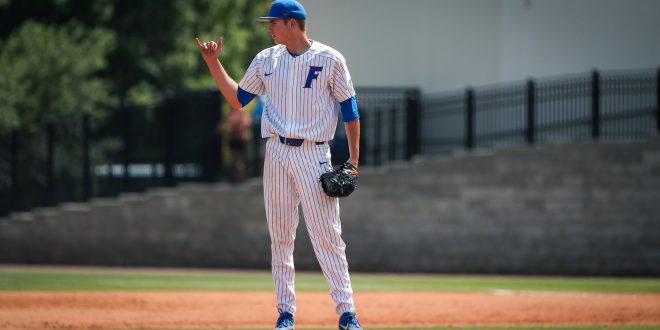 The Florida Gator baseball team (13-4) loses the final game of a three game series against Seton Hall on Sunday by a score of 6-4.  The win gives the Pirates (1-12) their first win of the season.

Gator coach Kevin O’Sullivan gave credit to the Pirates for the win, but believes the ending of Saturday night’s game with Seton Hall may have carried over into Sunday’s game, giving them some momentum.

In the double-header on Saturday, the Gators couldn’t stop getting hits and runs as they plated 27 runs in the two games, racking up 24 total hits in the process.

In Sunday’s game, it was the opposite. The Florida bats struggled at the plate on Sunday against Seton Hall. In the first five innings they had only three hits. Two of those hits came from just one batter, Wyatt Langford. He also scored their only run in those five innings with his solo home run to left field.

The offense finally came alive in the bottom of the sixth inning. Jud Fabian and Sterlin Thompson began the inning off with back-to-back singles putting runners on the corners with no outs. Fabian crossed home plate via a wild pitch and shortly after that, Kendrick Calilao scored Thompson on a sacrifice fly to right field. The Gators trailed at that point 4-3.

Unfortunately for Florida the offense would only score one more run in the contest.  The final run came home in the bottom of the ninth on a sacrifice fly from Jud Fabian.

The final offensive stats for the Florida were four runs on seven hits.

Rough Day in the Office for the Pitchers

We finally saw the return of Nick Pogue to the mound on Sunday after Tommy John surgery ended his season a couple of years ago. However, as expected, he was on a pitch count and was taken out after 1 and 2/3 innings of work before being replaced by lefty Timmy Manning.

For Manning, it would be an appearance to forget as he allowed two runs in the third and would be pulled before finishing the inning. He only pitched one total inning (three outs) in the game.

Following up Manning would be Nick Ficarrotta, who has been one of the better relievers for Florida. He threw the next three and 1/3 innings, allowing one run and giving up three hits.

His day ended after the sixth inning when Florida brought in Brandon Neely for the second day in a row.  However, for Neely it would be a short outing. He started the seventh and managed to get just one batter out. Neely gave up three hits and two runs.

Blake Purnell, another familiar face from this weekend, got called upon after Neely. Purnell would pitch the rest of the seventh and eighth. In the one and 2/3 innings of work, he gave up one hit with one strikeout.

To end the day for the Gators, O’Sullivan put super-senior Garrett Milchin on the mound. He made quick work of the ninth. He only needed seven pitches to get the side out. Those would be the only pitches he threw in the game as Florida would not put up enough runs in the ninth to give him another chance.

In all, Gator pitchers allowed six runs on 12 hits in the contest while also issuing five walks.  This is not the way the Gators wanted to end the series, especially when looking at what is in front of them with FSU coming to town on Tuesday and SEC play starting next weekend.  O’Sullivan says they are still trying to figure out roles in the bullpen going forward.

Big Upcoming Week for the Gators

Florida will begin the week with in-state rivals Florida State on Tuesday (3/15). They then shift focus to the weekend where they will begin SEC play. Florida will travel to Tuscaloosa to face Alabama to begin their SEC schedule.