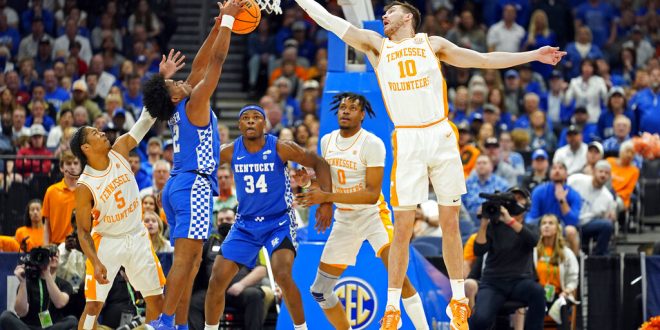 Kentucky guard Sahvir Wheeler (2) grabs a rebound away from Tennessee forward John Fulkerson (10) during the first half of an NCAA college basketball game in the semifinal round at the Southeastern Conference tournament, Saturday, March 12, 2022, in Tampa, Fla. (AP Photo/Chris O'Meara)

Saint Peter’s, led by third-year head coach Shaheen Holloway, secured an automatic bid by defeating Monmouth (21-13) in the final of the MAAC Tournament. The school will make its first NCAA Tournament appearance since 2011.

Holloway served as an assistant at Iona from 2007-2010 before assisting at his alma mater, Seton Hall, until 2018. As a player, Holloway was the 1996 McDonald’s All-American Game MVP, winning the award over future NBA stars Kobe Bryant, Jermaine O’Neal, Stephen Jackson and Richard “Rip” Hamilton.

The Peacocks will make their fourth tournament appearance overall and their second as a No. 15 seed. The team lost in the second round to Purdue in 2011.

The Peacocks have their work cut out for them Thursday. ESPN’s basketball power index gives the Wildcats a 95% chance to advance.

Kentucky is led by Congolese forward Oscar Tshiebwe. The junior is the nation’s rebounding leader, averaging 15.1 rebounds per game. He also leads the team in steals and blocks. Though Kentucky has five players averaging 10 points or more, Tshiebwe’s 17 points per game make him the team’s leading scorer as well.

Three organizations have recognized Tshiebwe as a first team All-American. He has also recorded a double-double in each of his last 15 games.

The Wildcats, who have more NCAA Tournament appearances than any other program, will try to win their first championship since 2012.

Basketball hall of famer John Calipari’s team missed the tournament last season after finishing with a 9-16 record. This year’s team lost the SEC semifinal to Tennessee (26-7).

Previous Florida Gators host a Top 15 matchup
Next No. 3 Tennessee vs. No.14 Longwood NCAA Preview