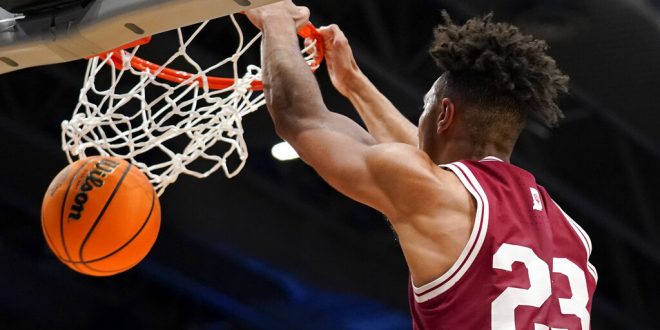 The 68-team field will quickly shrink to a Sweet 16 in the span of less than a week, as the NCAA Tournament approaches.

History of the First Four

Tuesday night, Indiana won its first NCAA Tournament game in years, holding onto the ball game by a thread after defeating Wyoming 66-58 in a First Four battle between No. 12 seeds.

In the 2021 men’s NCAA tournament, No. 11 seeds UCLA, Michigan State, Drake and Wichita State appeared in the First Four. Along with No. 16 seeds Norfolk State, Appalachian State, Mount St. Mary’s and Texas Southern.

Wednesday’s first four consists of No. 16 Wright State versus Bryant, and No.11 Rutgers against Notre Dame. The No.16 seeds will compete to advance and play No. 1 seed Arizona in the South Region on Friday.

The winner of the No.11 seed will take on Alabama on Friday. Alabama is projected to win the game, then lost its next round to Texas Tech.

Bryant has a strong offense with guard Peter Kiss and Charles Pride. Kiss is one of three players to start all 22 games and led the Bulldogs in scoring. Not only did he lead in scoring but was also ranked sixth in the NEC in scoring and ranked eighth in the NEC in field goal percentage.

Notre Dame has a solid record (22-10, 15-5 in ACC) and some flashy numbers. Being 29th most efficient offense nationally, and being ranked 19th nationally in three-point percentage at 37.7%.

Here’s what’s up next in the NCAA Tournament: