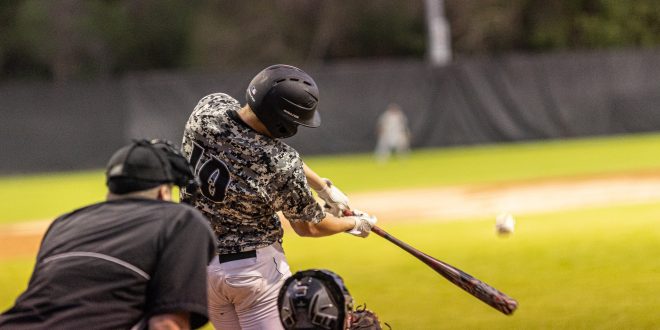 #10 Austin Cardozo swings on a fastball from Logan Thomas. Photo by Phil Stokes.

On Wednesday night, the Buchholz High School baseball team defeated North Marion High School at home by a score of 11-7.

Cooper Collins and Ryan McCraken each recorded two runs off of two hits. Alex Kasternsmidt went two for two at the plate while adding two runs of his own.

Austin Cardozo had a strong performance on the mound, improving his record on the season to 3-0. The sophomore allowed only three hits through four and one-third innings pitched.

After Cardozo retired the side in the top of the first inning, the Bobcats came out firing on all cylinders offensively.

Cooper Collins started things off with a base hit on the first pitch he saw and the bases were loaded shortly after. After Noah Hayse drove in a run on a fielder’s choice play at first, an avalanche in scoring ensued. Joaquin Gardner and Ryan McCraken each recorded an RBI base hit, and another run came off of an error.

After Cooper Collins smacked a pitch to center field, two more runs scored and the score at end of the first inning was 6-0 in favor of the Bobcats.

Cardozo Dazzles On The Mound

As the Bobcats took the field, the team rallied around their young pitcher. The sophomore recorded four strikeouts and allowed only five hits in tonight’s outing.

Cardozo found himself in a jam and allowed two runs in the third inning, but was able to strike out a batter with runners in scoring position to end the half-inning. He retired the side in the fourth, allowing only three hits through four innings pitched.

The Bobcats added a run in both the second and third inning. At the end of the fourth inning, Buchholz led North Marion by a score of 8-2.

After four and one-third innings of quiet offense, the Colts finally got things going.

With two outs in the inning, Jake Tompkins tattooed a ball deep to left field with a runner on to cut the Buchholz lead down to four. Cardozo retired a batter shortly after before stepping off the mound.

#10 Austin Cardozo was dealing, until the Colts belted in a two-run home run in the top of the fifth.

#21 Anthony Wilke takes over to start the sixth. pic.twitter.com/gtoGr2SzGR

After a second consecutive inning without much offense for the Bobcats, Anthony Wilke took over in relief for Cardozo. The sophomore recorded two quick outs in the top of the sixth, but then allowed three runs to a re-energized North Marion team. After a deep line-out to left field, the score in the middle of the sixth inning was 8-7 in favor of Buchholz.

In similar fashion to how they started the game, the Bobcats ended the game with clutch hitting and more runs on the board. McCracken got things started with a leadoff base hit in the bottom of the sixth.

After two errors by the Colts, an RBI base hit from Donny Heibert, and a sacrifice fly by Sia Wilson, the score at the end of the sixth was 11-7 in favor of Buchholz.

Joaquin Gardner came in to close things up on the mound for the Bobcats as the team won its third straight game.

Brooks added that the team still has room to improve when it comes to basics things such as throwing strikes and preventing errors.

The Buchholz Bobcats will begin a three-game road trip as they travel to St. John’s to take on Bartram Trail High School (4-3). That game is scheduled to take place on Tuesday, March 22nd at 6:30 p.m.