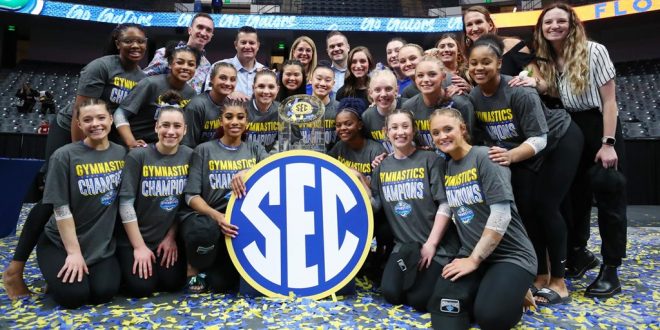 Florida won its 11th Southeastern Conference Championship meet Saturday. Their winning total of 198.20 is the second-highest in the meet's 41-year history. Photo By: Courtney Culbreath

In a Saturday night matchup of four of the nation’s top collegiate gymnastics programs, it was the Florida Gators who walked away with the hardware.

Senior Trinity Thomas took the all-around title as the Gators cruised to a 0.375 point victory over second-place Alabama, third-place Auburn and fourth-place LSU.

Florida vaulted ahead in their first event, putting together a 49.475 on the vault while the three other schools suffered critical setbacks. Thomas almost got a perfect 10.0 with her 9.975. Florida put together a 49.475 to take the early lead.

Alabama’s Cameron Machado received some major deductions to get a 9.075. The Crimson Tide bounced back to drop the low score and get a 49.425 and end rotation one in second place.

LSU’s Sami Durante and Kiya Johnson each fell on bars and were forced to count a 9.250 to their score. Auburn also had two falls on beam and had to keep Sunisa Lee’s 9.450. Auburn and LSU sat in third and fourth, respectively.

LSU’s four scores of 9.900 and above on beam helped the Tigers bounce back from their opening rotation. Haleigh Bryant got a team-high 9.950 as the Tigers put up the highest rotation two score of the meet with a 49.550.

Florida continued to expand its lead over Alabama on bars. Megan Skaggs and Thomas each earned a 9.950 on the event as Florida got a 49.475.

Alabama and Florida ran away with the competition in rotation three.

The Gators now own the SEC Championship beam score record with a 49.700 on the apparatus. Every single routine got a 9.900 or above, including Leanne Wong who earned the beam title with a 9.975.

Emily Gaskins had a rough lead off to bars for the Crimson Tide. After getting a 9.425 to open the rotation, Alabama earned three straight 9.950s.

Alabama’s 49.675 wasn’t enough to pull closer to the Gators.

Gators Get the Championship

Lee anchored on bars for the Auburn Tigers an SEC Championship 10.0.

Alabama’s Luisa Blanco suffered an unfortunate injury on the beam. The Crimson Tide junior landed awkwardly on her dismount and went down holding her shin.

The injury and subsequent fall received a 9.375 and put the win out of reach.

Thomas’ near-perfect floor routine locked up the SEC Championship for the Gators and the all-around title for the senior.

Thomas stole the show in the SEC all season. She continued the trend on Saturday. Thomas took the vault and floor titles with a 9.975 on each. Thomas ran away with the all-around title with her 39.825.

The NCAA Women’s Gymnastics Championship selection show will be March 22, according to the NCAA.

Chris Will is a second-year journalism student with a focus in sports and media. Originally from the Fort Lauderdale area, Will is now the beat reporter for Florida Gymnastics and covers all things sports in Gainesville.
@_Chris_Will_
Previous Gators Women’s Hoops Season Ends With First Round Exit
Next O’Sullivan Earns 600th career win after Gators dominate Alabama 13-6 Saturday