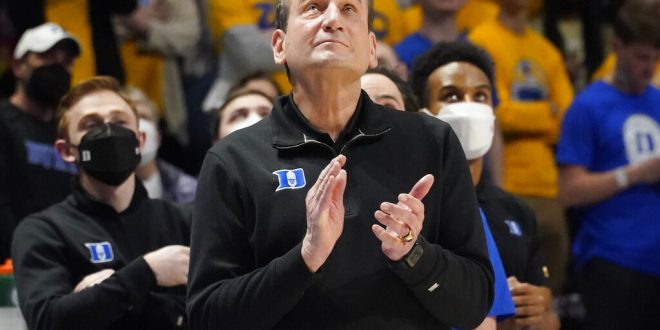 Duke coach Mike Krzyzewski applauds as he watches a video honoring him before the team's NCAA college basketball game against Pittsburgh, Tuesday, March 1, 2022, in Pittsburgh. Krzyzewski has announced his retirement at the end of the season. (AP Photo/Keith Srakocic)

Coach K not done yet

The Duke Blue Devils survived a late rally from Michigan State Sunday in Greenville. Surely, the 85-76 showcase in the second round of the NCAA  Men’s Tournament saw Michigan State’s hopes of appearing in the Sweet 16 for the first time since 2019 diminish. Moreover, the game secured Duke head coach Mike Krzyzewski’s 26th Sweet 16 appearance in his final coaching season. Coach K spoke to the media after the game and discussed what went into the team’s nail biting win.

In the Duke-Michigan State showdown, Duke’s defense was on display to keep coach Krzyzewski’s coaching career alive. Notably, Coach K commented on the team’s defensive play and said it was necessary as they anticipated great offensive play from the Spartans.

Elite defense from Duke was necessary to hold off the barrage of three-pointers MSU sent their way. Significantly, the Spartans went 11 for 22 at the three point line. Duke finished the night at five and 13 from the arc.

The team was led by freshman forward Paolo Banchero who had 19 points and seven rebounds. Also, Wendell Moore Jr., Mark Williams and Jeremy Roach each followed with 15 points a piece.

The Blue Devils trailed by five points with five minutes to go in regulation before taking the Spartans on a 18-6 run in the final minutes of the game. Coach K discussed the final few moments of the game and said that it was the heart of the team that pulled off the win.

Krzyzewski continued to praise the teams effort in the hard fought victory. He even got emotional as he detailed how proud he was of his team.

Coach K announced prior to the start of this season that this would be his last of his 46 years of coaching. In his 41 seasons at Duke, Krzyzewski tallied 1,170 victories, an NCAA record. In Sunday’s win, Krzyzewski also hit his 1,200 career win, becoming the first coach in history to achieve the milestone.

Krzyzewski reflected on his coaching journey and discussed the quality of competition he encountered in route to 1,200 wins.

Furthermore, Krzyzewski also reflected on the teams’ journey back to the Sweet 16. The Blue Devil’s last appearance in the Sweet 16 was in 2019, their season then ended in the Elite Eight Tournament. In 2021, a positive COVID-19 test forced them to drop out of the ACC tournament ahead of the quarterfinals. Significantly, this forced the team to miss the NCAA tournament for the first time since 1995.

On March 24, when the team faces Texas Tech in the Sweet 16, that will mark the programs 32nd Sweet 16 appearance. Coach K described the common theme amongst the many Duke teams he has led to the Sweet 16 Tournament.