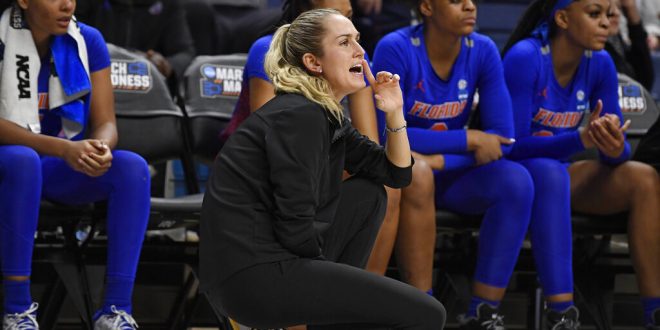 Florida head coach Kelly Rae Finley calls out to her team during the first half of a first-round women's college basketball game against Central Florida in the NCAA tournament, Saturday, March 19, 2022, in Storrs, Conn. (AP Photo/Jessica Hill)

As the Sweet 16 approaches, the only SEC women’s basketball team to advance is South Carolina. While Tennessee and LSU are scheduled to play Monday, Kentucky and Georgia have been eliminated.

The Gamecocks are the first women’s team in the SEC to advance to the Sweet 16 with a 49-33 with over Miami. Surely, they took their first win of the NCAA Tournament against Howard on Friday winning 79-21.  Certainly, South Carolina didn’t stop there with a win against Miami in the second round.

While the Gamecocks are having some shooting difficulties, head coach Dawn Staley believes as long as the defense keeps up the good work the bad shooting can fix itself later.

South Carolina looks to keep moving forward with their next matchup Friday against the winner of North Carolina and Arizona Monday, who’s matchup is scheduled for 10 p.m.

While the Gamecocks are secure for their next game, Tennessee and LSU has their work cut out for them.

The No. 4 seed Lady Volunteers will play No. 12 seed Belmont in Monday’s second round game at 7 p.m. Notably, these two teams met last in the ’18-’19 season when the Volunteers won with a final score of 84-76. Overall, the Belmont Bruins lead the series matchups between the two with six wins and four losses.

As those SEC teams continue to battle it out, Kentucky and Georgia’s season have come to an end.

The Wildcats fell short against Princeton with a final score of 69-62 in the first round, the Wildcats first lost since February. Princeton looks to stay hot after winning their 18th straight game and shutting down the Wildcats. Princeton will play against No. 3 Indiana Hoosiers at 8 p.m. today for their second round game.

As the teams continue to compete you can follow along here, fill out your own bracket and see who takes it all.