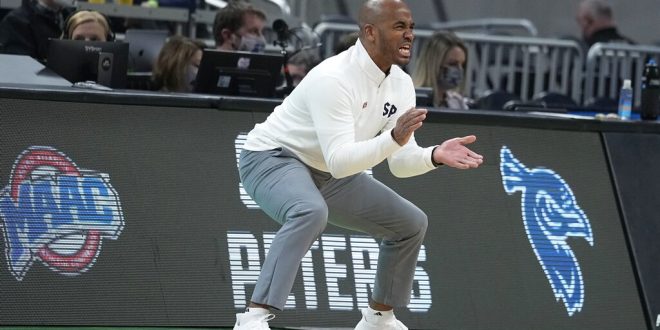 Saint Peter's head coach Shaheen Holloway shouts during the second half of a college basketball game against Murray State in the second round of the NCAA tournament, Saturday, March 19, 2022, in Indianapolis. (AP Photo/Darron Cummings)

For the first time in school history, Saint Peter’s advances to the Sweet 16 after upsetting Murray State 70-60. Now, the No.  15 Peacocks ended the Racer’s 21-game win streak and will face No. 3 Purdue Friday.

Saint Peter’s is only the third 15-seed in history to make it this far in the NCAA tournament and the first in the Metro Atlantic Athletic Conference (MAAC).

The first half was tightly contested as the Peacocks and Racers went back and forth, but Saint Peter held the lead throughout the contest. Certainly, they began to widen the gap heading into the second half after going on an 11 point unanswered run. As the clock ticked down, the Racers were able to catch up after going on a 9-2 run to put themselves back in contention.

In the final three minutes, a pair of free throws from KC Ndefo and then quick ten points added by Doug Edert would put the score at 64-57. But, the Racers were able to put it back at a two possession game with one minute left. Finally, with free throws from Daryl Banks III and Matthew Lee and then a solid defense would lead the Peacocks to victory.

The team shot 41.5% from the floor while holding the Racers to 34.6% overall. On the leaderboard, Ndefo grabbed 17 points and 10 rebounds for his seventh career double double. Then, the MAAC Defensive Player of the Year added six blocks to his resume. Edert added 13 points of his own.

Head Coach Shaheen Holloway expressed he is proud for the opportunity his players now have.

Saint Peter’s extended their winning streak to nine which is now the nation’s longest. The Peacocks will now look to make the elite eight as they prepare for their No.3 Purdue match-up.

Parker Welch is a Senior at the University of Florida majoring in Sports Media at the College of Journalism & Communications.
@parkerrwelch
Previous Men’s Sweet 16 begins Thursday
Next SEC struggles in women’s tournament