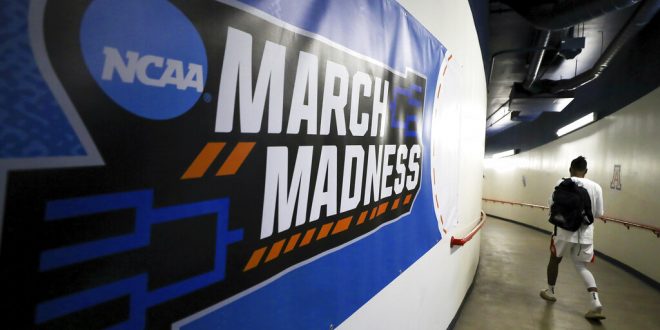 Arizona guard Shaina Pellington (1) walks past an NCAA March Madness sign in the hallways of McKale Center while walking to the locker room before Arizona's game against UNLV in the first round of the NCAA women's college basketball tournament Saturday, March 19, 2022, in Tucson, Ariz. (Rebecca Sasnett/Arizona Daily Star via AP)

March Madness is here! Notably, the SEC had six teams seeded on the top six lines, more than any other league in the tournament. Now, Arkansas is now the only team left from the SEC in the 2022 NCAA Men’s Tournament.

On Thursday,  Kentucky was upset by No. 15 seed Saint Peter’s in possibly one of the biggest upsets of March Madness so far. Surely, the Peacocks shocked the Wildcats and most of the country in a 85-79 win in overtime. Despite the Wildcats being Final Four favorite they came up short. Not to mention, according to ESPN only 3.04% of brackets chose St. Peter’s to pull off the upset over Kentucky. But, coach Shaheen Holloway had other plans in mind.

Notre Dame defeated Alabama, 78-64 in the first round.  Significantly, the Tide were without their starting point guard, Jahvon Quinerly for the majority of the game. Quinerly left the game just several minutes into the first quarter after suffering a knee injury. He led the team in scoring and assists per game.

The No. 6 seeded LSU Tigers couldn’t survive the first round after losing to Iowa State in a close game 59-54. The Tigers struggled offensively and committed 19 turnovers.

Auburn and Tennessee advanced past the first round, but couldn’t make it past the second round. The Auburn Tigers were dominated by No. 10 seed Miami in a 79-61 loss. Even though Auburn was ranked No. 1 in the nation after starting their season 22-1 they couldn’t survive and advance against Miami. Auburn freshman Jabari Smith is projected to go No.2 overall in the NBA draft if he decides to go pro.

Tennessee was favored to beat the Wolverines and advance to the sweet 16. Unfortunately, they were stunned by No. 11 seed Michigan in a 76-68 loss. Assuredly, the Volunteers were up at halftime and had the lead heading into the final stretch, but Michigan outscored Tennessee 22-8 down the stretch and would come away with the victory.

Up Next for Arkansas

Arkansas is the last SEC team alive in the tournament. The Hogs beat Vermont in the first round in a close game and outlasted New Mexico State to advance to the Sweet 16. The Razorbacks will be up for a challenge as they will face the No. 1 seed Gonzaga on Thursday March 24th in hopes on advancing to the Elite Eight.