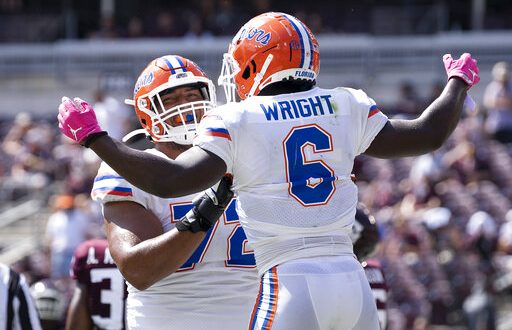 Nay’Quan Wright talks injury and being a leader

Florida Gators held a press conference on Tuesday, where Nay’Quan Wright spoke about his ankle injury, his recovery and the team.

At the game against Florida State in the fall, Wright ran down the sideline toward the end zone. However, FSU linebacker Amari Gainer came from behind and pulled them to the ground, which caused them both to land on Wright’s ankle. He broke his ankle just like an injury he sustained in high school, but the other leg.

When he first broke his ankle in high school, he did not have access to as many resources that could have made a speedy recovery as he does at Florida.

Last season, Wright scored two touchdowns: one against Tennessee and the other at the Samford game. Out of all the running backs, Wright was the only one to score a touchdown. He totaled 326 rushing yards out of the 12 games he played. In the game against Alabama, he had 58 rushing yards.

Recently, he started trying to run and get active again. Wright looks forward to getting back to working with the team and he misses the competitiveness of football, but he understands that he needs to take the recovery process slowly.

Even though he cannot participate much with the team at practice, Wright said he realized he need to take on a leadership role for the team. As a leader, he attends practice to push his teammates to get better and motivate the younger players.

With new coach Billy Napier, the practices are more disciplined and he said he wants his team work harder to improve. According to Wright, Napier gives his all at every practice and the team needs to do that in return. At the moment every practice seems like a competition while the team works together to do drills, they are competing for their positions. Wright said that even he is competing.

This season Wright hopes for a shot at the National Championship. He talked about how he dreams of winning it and how they owe it to the Gator Nation. When asked if the team thinks “why not us” because Alabama won a few and Georgia won this year, he said that the mentality is not a why not us. It is more of on the team to work harder to get to where they want to be and other teams do the same things, so Florida just has to work harder.

In the one on one meetings with the coaching staff, they encouraged Wright to get healthy. As Wright finishes up his recovery, he said he plans to prioritize his health. He said he will continue to aide his team in aspect he can.