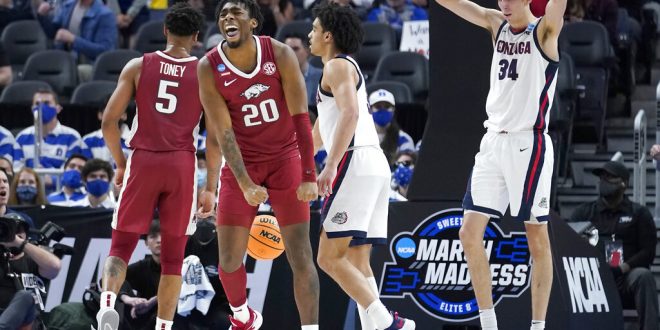 Arkansas forward Kamani Johnson (20) celebrates in front of Gonzaga center Chet Holmgren (34) during the second half of a college basketball game in the Sweet 16 round of the NCAA tournament in San Francisco, Thursday, March 24, 2022. (AP Photo/Marcio Jose Sanchez)

To say this March has been anything but madness would be a disservice to the 2022 NCAA Men’s Basketball Tournament. After a wild opening round of play, the Sweet Sixteen has proven to be just as crazy. In the opening game of the Sweet Sixteen, the Arkansas Razorbacks took down the tournament’s No. 1 overall team, the Gonzaga Bulldogs, 74-68.

This game was neck-and-neck from the opening tip-off. The two teams traded leads for a majority of the game with the game’s largest lead being nine points. Also, despite both teams having three players score double-digit points, shooting came at a premium. Gonzaga’s leading scorer, Drew Timme, scored 25 points but made only nine of his 19 shot attempts. Meanwhile, Arkansas’ leading scorer, JD Notae, scored 21 points, even though he went 9-29 from the field. But even Chet Holmgren’s double-double of 11 points and 14 rebounds prior to fouling out was not enough to overcome the SEC’s only standing tournament team.

This massive upset win over Gonzaga has propelled the Razorbacks to their second straight Elite Eight appearance. But this win means more than just an opportunity to play in the Elite Eight. This win marked Arkansas as the only team to beat the No. 1 team in the country in both the regular season (Auburn) and in the NCAA Tournament (Gonzaga) in the same season. This is also the first time the Razorbacks have taken down a No. 1 seed in the NCAA Tournament. Entering the game, Arkansas was 0-5 all-time against the No. 1 team in the nation.

Arkansas is the first team ever to beat an AP No. 1 during the regular season (Auburn on Feb. 8th) and the NCAA Tournament (Gonzaga tonight) in the same season. pic.twitter.com/sWZFbJc0h4

Going into the Sweet Sixteen, Arkansas knew they were the underdogs. Before the game Razorbacks head coach, Eric Musselman elaborated on the lack of hype his team was receiving as opposed to their powerhouse opponents.

“We understand the respect factor for this game is kind of nonexistent from a national standpoint,” Arkansas head coach, Eric Musselman, said.

As the Razorbacks are now headed to their second straight Elite Eight, Musselman might be hearing some more hype towards his team in the coming days.

As the nation’s No. 1 overall team heads home, Gonzaga fans now turn their attention to NBA prospect, Chet Holmgren. It is unclear whether Holmgren will be headed to the NBA Draft, but many signs point to this Sweet Sixteen defeat being Holmgren’s final college game. And for Arkansas, the Razorbacks are looking to punch their ticket to the Final Four for the first time since 1995. The Razorbacks will now play Duke in the Elite Eight after the Blue Devil’s victory over Texas Tech.