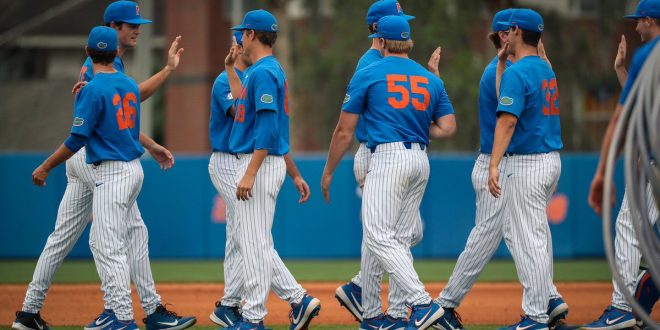 The Florida Gator baseball team (17-6, 3-2) fell to the LSU Tigers (16-7, 2-3) on Saturday at home, losing 16-4. They got behind early and could not get back into the game. They head into Sunday’s game looking for a win to take the series over the Tigers.

Back at it tomorrow in the rubber game.

A Night to Forget for Gators Pitching

On Saturday, Florida gave sophomore Brandon Sproat the start. It was not a great start for him as he walked the first batter and the gave up a two run homer to immediately put the Gators behind in the game.  The Gators got out of the inning not giving up any more runs, but the onslaught continued shortly after.

Sproat worked a clean second inning, but the same wouldn’t be said about the third. He struggled once again, allowing the first two batters on without getting an out. In the end, LSU scored six runs in the inning, chasing Sproat from the game.  Timmy Manning had his name called first out of the bullpen, but, just like Sproat, it wouldn’t be a pretty beginning. Manning struggled to get comfortable to begin his appearance out of the pen. Immediately after being put in, the Tigers hit back-to-back home runs putting the Gators down 8-0. He settled down in the fourth and made his way into the fifth inning, but that was as far as his appearance went.

After Manning, the Gators went to the bullpen often.  The first to come out of the bullpen was Tyler Nesbitt. He came in and immediately got one out, but before getting out of the fifth inning the Tigers scored another run by way of an error. This extended the deficit for Florida to 9-0.  Nesbitt finished off the fifth and sixth inning and prevented further damage.  Lefty Philip Abner relieved in the seventh and Karl Hartman worked the eighth inning.  He started off the ninth, but got pulled before even registering an out in the inning. The last pitcher from the Gator bullpen would be Carsten Finnvold. He closed out the ninth inning, but it was not a beautiful process. In total, the Tigers scored seven runs in the inning, which put the final score at 16-4 in favor of LSU.

As a unit, the pitchers gave up 16 total runs on 13 hits. They also walked seven and hit two batters. Not the prettiest night from Gator pitching and they will be hoping to rebound on Sunday against the Tigers.

These types of performances will frustrate any coach, and Kevin O’Sullivan reaffirmed this.

Gators Offense Outpaced by the Tigers

The bats were nonexistent for a large part of this game. It was not until the fourth inning when they got their first hit. In the sixth, the bats came to life.  They started the inning with a Deric Fabian lead-off  home run to right field. After that, Sterlin Thompson launched a no-doubt homer to right field as well and Kendrick Calilao would send a double to left-center field bringing the score to 9-4 but that is as close as the Gators would get in this contest.

Thompson was the only Gator tonight to have multiple hits. He finished the game going two-for-three with a homer against the Tigers. He now is at seven home runs and 22 RBIs on the season.

Outside of this sixth inning, there is not much to talk about when it comes to the Florida offense in this game. They were outmatched and outpaced by the Tigers. As a whole, Florida struck out nine times and only had five total hits. Looking at the Tigers, they had 13 hits on 16 runs.

The rubber game of the series takes place on Sunday.