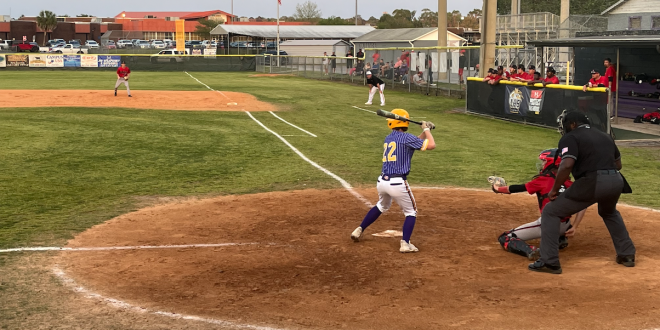 The Columbia Tiger baseball team secured its 10th straight win in a close contest with the Baker County Wildcats on Tuesday night. After initially falling behind by two runs, the Tigers responded with four unanswered runs of their own in a 4-2 victory. Hayden Gustavson played a key role in Columbia’s win with two doubles and a crucial RBI. Ty Jackson also chipped in with two RBIs in the sixth inning to give the Tigers the lead.

Reeling From A Slow Start

The Tigers quickly fell behind at the beginning of the game. After surrendering a run to the Wildcats in the top of the first inning, Columbia’s offense struggled to respond. The Tigers were unable to get on base until the fourth inning. Junior Matt Dumas knocked a single into the outfield for Columbia’s first hit of the game. Dumas stole second base in the following at-bat to give the Tigers a man in scoring position.

Gustavson then stepped up to the plate with one out and Dumas still on second. With the team needing a spark to get back in the game, Gustavson blasted a double that brought Dumas home.

“He made a good pitch with the curveball, but I was kind of expecting it,” Gustavson said. “So I sat back, hit up the middle [and] Matthew’s speed brought him home. ”

At the end of the fourth inning, the Tigers and Wildcats are tied 2-2. Columbia’s offense is heating up following an RBI double from Hayden Gustavson (shown here) and an RBI single from Ty Jackson. pic.twitter.com/f7idrNHuQU

When he reached second base, Gustavson sent a “wake-up call” to his teammates in the dugout to fire them up. It appeared his message was received. Two at-bats later, Ty Jackson hit a single that brought Gustavson home that tied up the game for the Tigers. Tigers coach Chris Howard praised Gustavson’s leadership abilities and noted how he is always able to energize his teammates.

“He’s been a spark plug since he got here,” Howard said. “He gets the team up, and you have to have a guy like that.”

Taking A Late Lead And Never Looking Back

As the momentum began to shift in favor of the Tigers, the Bobcats had a hard time keeping up. At the start of the sixth inning, Brent Howard picked up a single to lead off the inning. Gustavson soon followed with another double to give the Tigers runners on second and third base. What followed was a bit of chaos that ended up paying off for Columbia.

Ty Jackson hit a line drive into the infield that a Baker County defender scooped up. However, due to a miscommunication on the defensive side, Jackson made it to first base while Gustavson made it home. The Eagles had now taken their first lead of the game.

The Tigers have taken the lead! After six innings, Columbia is holding on to a 4-2 lead. The Tigers have taken advantage of multiple defensive miscues from the Wildcats, including on this line drive from Ty Jackson that brought Brent Howard home. pic.twitter.com/xlmECFGNDe

In the following at-bat, the Wildcats made an error that allowed Gustavson to score as well. With a two-run cushion, the Tigers had taken control of the game. However, they were not out of the woods yet, as the Wildcats still had one last chance to answer back in the seventh inning.

The Tigers elected to send Ty Floyd to the mound to close out the game. With the crowd cheering at the top of their lungs, the stakes were high for both teams. However, Floyd kept his composure as he stepped to the mound and remained focused on the task at hand.

“I just know that they can’t hit whatever I’m throwing,” Floyd said. “I just try to throw to the catcher, and act like the batter isn’t there.”

Floyd put together a fantastic stretch in the final inning, giving up no hits while striking out two. With Floyd’s final strikeout, the Tigers clinched the win, much to the pleasure of the home crowd.

And that’s the game! Following a clutch outing for Ty Floyd on the mound, the Tigers secure a 4-2 victory to give them their 10th win on the season. The Tigers and Wildcats will meet again this Thursday at Baker County High School. pic.twitter.com/L5zFeu9U3x

A Rematch This Thursday

While the Tigers got the best of the Wildcats on Tuesday night, the Wildcats will be looking for revenge later this week. The two teams will meet again this Thursday at 7:00 PM. This time, Baker County will play host for the game. With Thursday’s game coming up next, the Tigers will hope to complete the sweep and continue their stellar season.

Jack Meyer is a first-year student at the University of Florida. He is majoring in Journalism and specializing in Sports and Media.
@jackmeyerespn
Previous Florida Baseball Takes Down Florida State In Rivalry Match-Up
Next Offensive Fireworks And Perfect Game From Troy Freeman Power Oak Hall Baseball To Victory