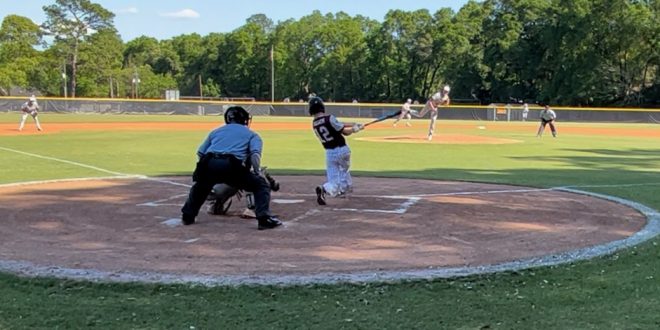 The Oak Hall Eagles baseball team continued its strong start to the 2022 season on Tuesday afternoon. In their match up with the Redeemer Christian Lions, the Eagles had everything clicking in a 17-0 blowout win.

Troy Freeman had one of his best games to date. He pitched a perfect game in four innings while hitting two separate two RBI triples.  Jack Kuzmicki also dominated offensively with four hits and five runs batted in. Jackson Beach finished with two hits, two walks and three stolen bases on the day.

Taking Over Early On In The Afternoon

The Eagles controlled the flow of Tuesday’s game from the first pitch. Freeman quickly took care of the Lions’ top of the order to start the first inning. When Oak Hall stepped to the plate, things got out of hand fast.

Jackson Beach and Harrison Beach were walked in the first two at-bats for the Eagles. With no outs and two men on base, Kuzmicki was set for a big play as he entered the batter’s box. With the count at 1-2, Kuzmicki ripped a hard-hit ball that brought both Beaches home. Kuzmicki wound up with his second triple of the year to give Oak Hall an early 2-0 lead.

Another blast from Kuzmicki! A deep shot to the outfield lands Kuzmicki his second triple of the season as he drives two runners home. Oak Hall leads 2-0 in the bottom of the first with no outs. pic.twitter.com/V4x8ZE44Ol

Following today’s game, Kuzmicki leads the team with 15 RBIs. While his hard-hitting swings have played a sizable role in driving runners in, he also credits his teammates for consistently finding ways to reach the bases.  While the Eagles roster as a whole has excelled at getting on base this season, two players specifically came to mind for Kuzmicki.

“A lot of the RBIs… come down to Harrison and Jackson in front of me,” Kuzmicki said. “Every time I’m at the plate, there’s a guy on second and third. If I hit the ball anywhere, that’s two [runs].”

Two at-bats later, Freeman blasted a triple of his home to bring home two more runs for the Eagles. The Eagles went on to rack up a total of 10 runs in the first inning.

Neil Ruth and Emory Ezzell scored off a wild throw from Lions catcher Dom Riddle. Later on in the inning, Kuzmicki hit a single that brought home Aaron Akins and Jackson Beach. To cap off their takeover, Ethan Szlachetka hit a single to bring home Kuzmicki and Harrison Beach.

At the end of the first inning, the Eagles lead 10-0. The bats have been on FIRE for Oak Hall today, with multiple RBIs from Kuzmicki, Freeman and Ethan Szlachetka. Szlachetka’s 2-RBI single is shown here. pic.twitter.com/DwnZ7uFG7d

Adding On To The Momentum

The Eagles remained hot as they entered the second inning. After Freeman sat down another set of Lions batters, Oak Hall picked up where they had left off offensively. With the bases loaded, Ezzell scored off a Harrison Beach walk. Soon after that, Kuzmicki hit another two RBI single.

Freeman then stepped to the plate with two runners on base. He proceeded to notch his second triple of the day, extending Oak Hall’s lead to 15. By the end of the second inning, the Eagles had jumped out to a 16-0 lead over the Lions.

After two innings, the Eagles have hopped out to a massive 16-0 lead. With even more offensive fireworks from Oak Hall in the second inning, this game may be over very soon. pic.twitter.com/U9ykiKi0aq

Finishing The Day In Style

With a prospective mercy rule on the horizon, the margin of error for Oak Hall’s defense was slim. While a perfect game had not crossed Freeman’s mind, he knew he had an opportunity to send the Lions home early.

“I don’t really look for those [stats],” Freeman said. “I just want to pitch a full game and get out of the innings.”

Keeping this in mind, he threw two strikeouts early on in the third inning. A groundout to Harrison Beach in the following at-bat secured another shutout inning for the Eagles.

While the Eagles offense had cooled down by the third inning, they still chalked up another run courtesy of a triple from Jackson Beach. After getting on base, he scored on a wild pitch in the following at bat.

Entering the fourth inning, Oak Hall was three outs away from an early victory. All it took was three consecutive ground outs from the Lions for Freeman to clinch a perfect game. While the team’s offense gave them an enormous lead early on, Freeman’s performance on the mound (which included five strikeouts) helped Oak Hall ice the game.

Tuesday’s win puts the Eagles at 4-1 on the year so far. Their next game will be this Thursday at 6 PM, when the Eagles will visit the Eastside Rams. With the Rams sitting at 3-5 this season, their match up will give the Eagles to extend their current win streak to five games.

While Oak Hall has gotten some time off between games in the past few weeks, the team has plenty of action coming up. After Thursday’s game, the Eagles will have three games the following week, two of which will be on the road. Head coach Kevin Maris expressed confidence that his squad is ready for the season to heat up in these next couple of weeks.

“We have to make sure we stay healthy and manage arms. We got two-way players playing, and that’s always a juggling act,” Maris said. “We’re all healthy and ready… and we’re looking forward to it.”

Jack Meyer is a first-year student at the University of Florida. He is majoring in Journalism and specializing in Sports and Media.
@jackmeyerespn
Previous Late Offensive Surge Carries Columbia Tigers Baseball To Victory Over Baker County
Next Santa Fe Boys Lacrosse Falls to Buchholz