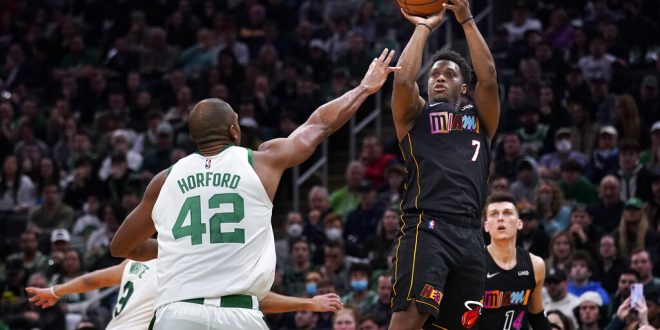 The Miami Heat beat the Celtics and clinch a spot in the 2022 NBA playoffs ♨️ pic.twitter.com/Ah6ATQaH7z

Jimmy Butler and Kyle Lowry were the lead scorers for the Heat. Butler put up 24 points, and Lowry had 23 points. Lowry also had eight assists which created fascinating plays. One of the assists allowed Butler to make a fast-break dunk that resulted in the teams’ bench erupting in celebration.

Jaylen Brown and Jayson Tatum led the Celtics in points. Brown scored 28 points and had ten rebounds. Tatum put on a show for the fans as he made various dunks throughout the game that resulted in the entire arena cheering with awe of Tatum’s athleticism. Tatum ended up putting up 23 points, five rebounds and six assists.

This was an intense match-up for both teams as they were neck in neck throughout the entire game. The Heat obtained the lead at the end due to Boston falling short offensively. The Celtics did not score on three straight possessions. Jayson Tatum made a driving layup assisted by Jaylen Brown in the last minute and forty seconds. After that, the Celtics had three opportunities to score but failed to put up any points. Miami took advantage of the Celtics’ offensive and defensive play and took the lead in the end.

Miami secured the win through free throws made by Bam Adebayo and Butler.

The Heat changed the course of the game by successfully putting up shots and executing plays. Miami’s overall team chemistry results in great offensive and defensive play as this was the primary factor that secured their spot in the playoffs.

What’s Next for the Heat?

The Heat will be traveling to Chicago to go up against the Bulls this Saturday at 8 p.m.