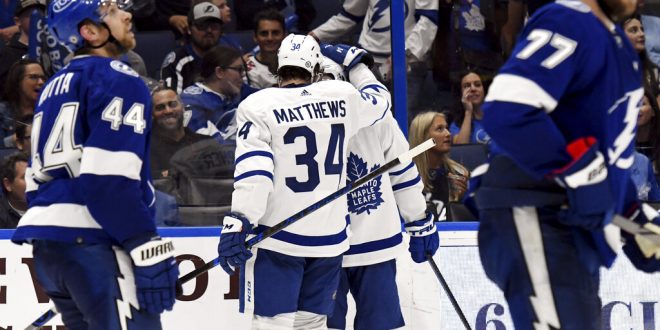 The Tampa Bay Lightning fell to the Toronto Maple Leafs 6-2 in Monday night’s game. The Lightning now stand at 43-19-7 on their season and fourth in the Atlantic Division.

Lightning head coach Jon Cooper feels that his team was “too easy to play against.”

Auston Matthews, center and alternate captain for the Maple Leafs, had three goals and one assist for his third hat trick of the season. Matthews took charge as he knew that this was a very big game for him and his team with both teams being in a playoff spot. Matthews now has 54 goals on the season, tying him for the franchise season record for goals in a season with Rick Vaive who played for the Leafs from 1980 to 1987. With the better part of a month remaining in the regular season, Matthews could take the record for himself.

Jack Campbell, Toronto’s goaltender had 32 saves in the game, helping his team secure the victory. Mitch Marner had one goal on three shots and two assists. Michael Bunting had two assists, but could not find the back of the net on any of his four shots on goal. This was, however, Bunting’s sixth straight multi-point game. Pierre Engvall had one goal and one point while David Kampf recorded one assist of his own.

Leafs winger William Nylander was scratched from the game due to illness.

Rough night for the Lightning

Tampa Bay’s goaltender, Andrei Vasilevskiy, had a rough outing giving up six goals against 39 shots. Steven Stamkos assisted on both of the Lightning’s goals to Nikita Kucherov and Jan Rutta.

Missing for the Lightning in Monday’s game due to an upper-body injury was defenseman Ryan McDonagh, who took part in the morning skate.

The Maple Leafs look to take on the Florida Panthers tonight while the Lighting play the Washington Capitals on Wednesday.