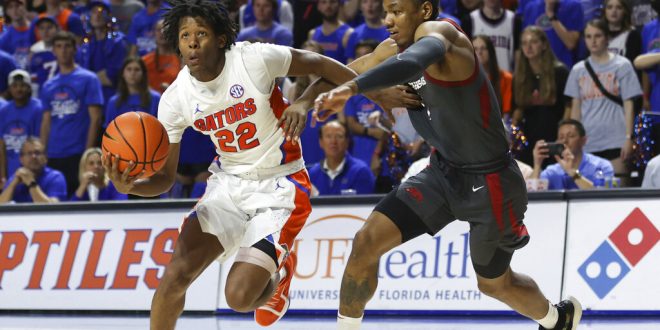 Florida Gators basketball will lose starting guard Tyree Appleby in the fall of 2022. Reports from 247 Sports confirmed Appleby entered his name in the transfer portal on Monday. He will be a sixth-year senior next season during his final year of collegiate eligibility.

Appleby spent the last two seasons with the Gators after transferring from Cleveland State. In the 2021-2022 season, he finished as the third-leading scorer with 10.9 points per game.
He also collected 2.1 rebounds and 3.7 assists each game. Most memorably, Appleby put up a buzzer-beater to defeat Ohio State early in the 2021-2022 season.

This is how Florida’s Tyree Appleby put the Gators — who trailed most of the night — over Ohio State to remain undefeated.

Thanksgiving week college hoops is the best non-March week on the calendar. pic.twitter.com/zvrLLRJeUk

Additionally, Appleby was the leading scorer in Florida’s upset against No. 2 Auburn, boasting 26 points. In his two seasons with the Gators, he played 59 games and averaged 11.1 points, 3.5 assists, 2.5 rebounds, and 1.4 steals per game. His years at Florida were played under head coach Mike White, who recently assumed the head coaching position at Georgia.

In his freshman and sophomore seasons with the Vikings, Appleby became a standout player in the Horizon League. He was named to the 2018 All-Freshman Team and All-Tournament Team. Later, he became a member of the 2019 All-Horizon League (2nd team). Overall, his most impressive performance came in his second year where he averaged 17.2 points and 5.6 assists per game.

Appleby is one of two starters leaving Florida in 2022. In addition to him, senior forward Anthony Duruji recently announced his entrance into the 2022 NBA Draft. Duruji transferred to Florida in 2019 after two seasons at Louisiana Tech. In 55 games with the Gators, he averaged 7.4 points and 4.2 rebounds. On Friday, Duruji thanked Gator Nation for their support in his social media announcement.

Overall, the Gators Men’s Basketball program will see a different team dynamic without Appleby and Duruji. Last season, Florida finished 20-14 overall and 9-9 in SEC play. With Todd Golden as their new head coach, the team will have a fresh start at success in the upcoming season.