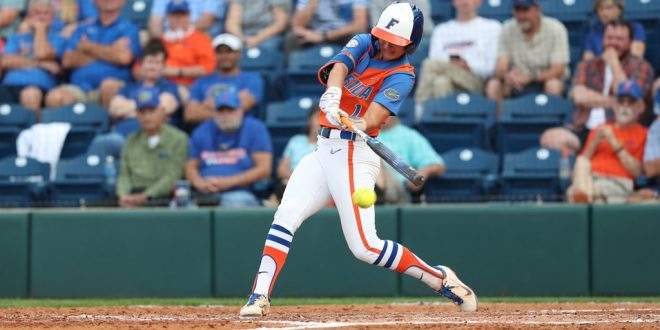 No. 7 Florida Softball bounced back against the No. 5 Alabama Crimson Tide on Monday to snap a three-game losing streak. The action-packed 12-7 victory got the Gators their 31st win of the season.

Don’t Call it a Comeback

The Gators came back from two deficits in the game to complete their 13th comeback win of the season.

The Crimson Tide put together three runs through the first two frames and the Gators saw themselves down early. A solo home run from freshman Reagan Walsh got the Gators on the board in the bottom of the second. It was the sixth home run of the year for the Gators’ home run leader.

With two outs, Walsh continued her dominance in the third inning with a two-RBI single up the middle of the diamond. She brought Florida back to level terms with the Tide going into the fourth inning.

Alabama got back on top with a two-run home run from senior Ashley Prange. The Crimson Tide were up 5-3 halfway through the game.

Firepower in the Fourth

Down yet again, the Gators responded in the bottom of the fourth.

With the bases loaded, Florida got one back after a wild pitch scored freshman Sam Roe. Hannah Adams brought in two more with a single into left field. Florida put together three more runs after two more wild pitches and a Walsh sacrifice fly, her fourth RBI of the night. It was her sixth multi-RBI game of the season.

The Gators went up 9-5 after a six-run fourth inning.

Things would slow down in the fifth inning with neither team scoring, but the Gators would pick things back up in the sixth.

A series of singles would put three more on the board for the Gators and put the game just out of Alabama’s reach. The Crimson Tide got two runs back in the seventh but couldn’t complete the comeback of their own.

Florida Softball (31-9) will be back in action Thursday when they travel to Ole Miss for the first of a three-game series. The Alabama Crimson Tide (33-6) will host Mississippi State for a three-game home series of their own starting Thursday.

Chris Will is a second-year journalism student with a focus in sports and media. Originally from the Fort Lauderdale area, Will is now the beat reporter for Florida Gymnastics and covers all things sports in Gainesville.
@_Chris_Will_
Previous Gainesville Girls Lacrosse Battle for Districts
Next Lightning look for a win against the Stars and a playoff spot