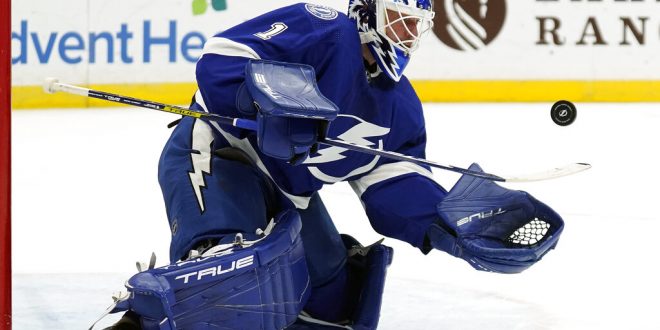 Tampa Bay Lightning goaltender Brian Elliott (1) makes a save on a shot by the Buffalo Sabres during the first period of an NHL hockey game Sunday, April 10, 2022, in Tampa, Fla. (AP Photo/Chris O'Meara)

The Tampa Bay Lightning are facing the Dallas Stars at 9:30 p.m. on ESPN with a chance to clinch playoff birth.

The Lightning are coming off of a 5-0 home win against Buffalo. In addition, goalie Brian Elliot recorded 28 saves. Elliot was named the Player of the Week.

Meanwhile, the Stars are coming off of a 6-4 away win against the Chicago Blackhawks. In the Sunday game, Jamie Benn, Joe Pavelski, Roope Hintz, Jason Robertson and Tyler Seguin all scored. Furthermore, Robertson scored back-to-back goals in the second period just over three minutes apart.

The Lightning and Stars’ previous game against each other

The Lightning and the Stars faced each other for the first time this season in Tampa, FL, on Jan. 15. The Lightning came up with a 3-1 win. In the mid-January match up, goalie Andrei Vasilevskiy recorded 19 saves. Tampa Bay’s Brayden Point, Colton and Alex Killorn scored. Furthermore, right-wing Kucherov had two assists to Point and Colton.

In the first-game between the two teams, the Stars’ Esa Lindell scored the only goal for Dallas in the first period.

The NHL Public Relations Twitter page posted a tweet explaining the possible scenarios for the Lightning to clinch a seat in the playoffs Tuesday.

A look at how the two-time defending #StanleyCup champion @TBLightning can punch their ticket to the postseason tonight. #NHLStats pic.twitter.com/oYWjPmVWfn