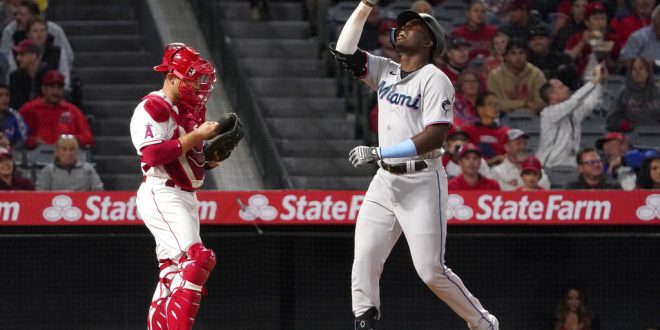 After splitting games with the San Francisco Giants, the Marlins are on a two-game losing streak. This includes a 6-2 loss in Monday night’s away game against the Los Angeles Angels.

At centerfield, Jesus Sanchez scored the Miami Marlins’ only runs for the game while having home runs in the fourth and ninth innings. Joey Wendle’s double in the second inning was the Marlins’ only other base hit on Monday night. The Marlins batters struck out 11 times.

Standout Players for the Angels

Centerfielder Brandon Marsh reached base three times going two for three with four RBI. Leftfielder Jo Adell had two RBIs in Monday night’s game with one home run. Adell led the second inning by batting a pitch over 80 mph at 430 feet. At catcher, Max Stassi had two runs on one hit and three walks.

Adell and Marsh hit RBI doubles to seal the game in the eighth inning against Marlins pitcher Shawn Armstrong.

Standout Players for the Marlins

Centerfielder Jesus Sanchez was the only offense of the night as he blasted two home runs over the wall. At third base, Joey Wendle contributed in Monday night’s game with one hit.

Head coach for the Marlins, Don Mattingly was involved in a verbal altercation in Monday night’s game with Nick Mahrley, the home plate umpire after two pitches thrown to Jesus Aguilar, the first baseman, were called strikes.

Marlins pitcher Elieser Hernandez‘s night on the mound ended early after giving up two home runs in the first four innings. He received a loss for the game, his first on the season.

The Marlins will look to bounce back against the Angels as they play them again tonight.