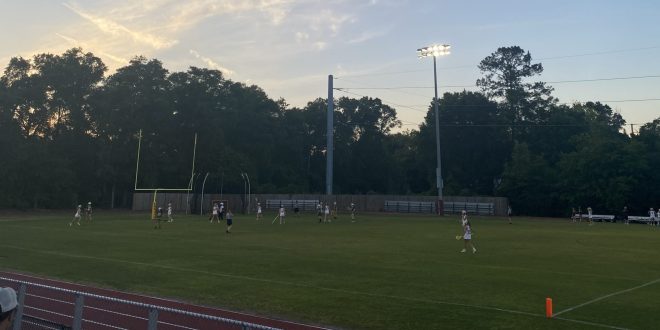 The Oak Hall girls lacrosse team (8-4) began their quest for a district championship Monday evening. The team in their way was the Eastside Rams (2-9). The teams had bet once prior to this matchup on March 8 in which Oak Hall prevailed over Eastside 21-0.

I’m at @OakHallSchool where the girls lacrosse team is taking on the Eastside Rams in the district semifinal. Follow this thread for updates. @ESPNGainesville pic.twitter.com/COlbwn48PV

Within the first five minutes of the game, the Eagles had already scored four goals. It was clear what the result of this match would be the entire night. Freshman Harper Johnson got things going for the Eagles in a strong first half. Oak Hall dominated possession moving the ball side to side with ease. They rarely faced any resistance around the goal. When they did, they were patient until they got an opportunity. Other standouts included Sophia Moreschi who provided multiple goals and assists in the first half.

Due to injury, Eastside was forced to play with one less player for the duration of the match. If a team is winning by ten goals at any point in the second half, the clock begins to run without any stoppages. Oak Hall was able to get all their players involved in the match. Despite having no substitutions for the entire match, Eastside battled until the final whistle. The Eagles were still able to pitch in six more goals despite the shortened second half. The game finished 20-0 with a victory for Oak Hall.

The Oak Hall girls lacrosse team will now take on the Santa Fe Raiders for the district championship. Santa Fe defeated district rival Gainesville High in the other semifinal. The team’s only previous meeting this season was in March when Oak Hall defeated Santa Fe 17-1.  The winner will receive an automatic bid to regionals as part of the state tournament. The game will take place on Wednesday, April 13 at Oak Hall.

Freshman Journalism major at the University of Florida.
@@jbow2745
Previous Lightning look for a win against the Stars and a playoff spot
Next Marlins Look to Bounce Back Against the Angels