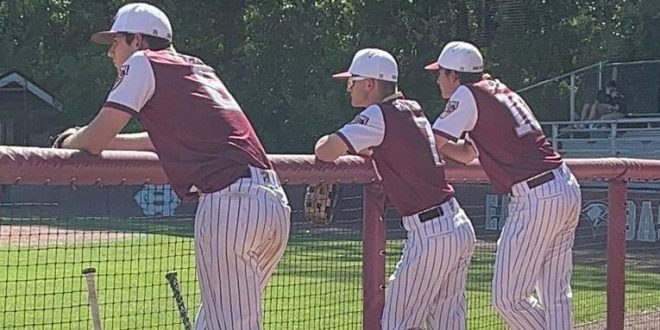 The Oak Hall Eagles have started out this season blazing hot. Their matchup with the Trenton Tigers last Monday only confirmed how strong they have become. The Eagles took down the Tigers in five innings and walked away with a 13-3 victory. An eight-run third inning for the Eagles sparked yet another massive win; the team has now won six games this year by a margin of 10+ runs.

Jack Kuzmicki helped boost the Eagles to victory with a fantastic performance at the plate. After only securing one hit in his last two games, Kuzmicki knocked out two doubles and drove in five runs against the Tigers. Troy Freeman also provided some firepower for the Eagles offense, picking up two singles and driving in four runs of his own. Harrison Beach notched his first three-game hit of the season in addition to scoring three runs for Oak Hall.

Freeman also grabbed the win on the mound, giving him a record of three wins and one loss on the season. He pitched for 4 2/3 innings and gave up six hits, three runs (two earned runs) and one walk. Freeman’s pitching in the first four innings played a major role in Oak Hall’s early lead. He only gave up three hits and one run prior to the fifth inning.

Freeman’s Strong Start On The Mound And At The Plate

Oak Hall’s defense made quick work of Trenton in the top of the first inning. The inning went like this for the Tigers: A lineout to center field. A ground out to first base. A pop out to the pitcher. With just five pitches, Freeman and the Eagles kept the Tigers’ top of the order off the bases.

Already off to a strong start, the Eagles swiftly got to work in the bottom half of the inning. Jackson Beach nailed a single into center field to lead off the inning, while Harrison Beach picked up a walk immediately after. However, Oak Hall’s next two batters both hit pop flies in their subsequent at-bats. This elevated the stakes for Freeman as he stepped to the plate.

On one hand, both Beaches had advanced a base on a passed ball earlier in the inning, giving Oak Hall runners on second and third base. On the other hand, the Eagles had already picked up two outs. A single misstep from Freeman would strand both runners and the team would come out of the inning empty-handed.

With all eyes fixed on him, Freeman delivered a well-hit ground ball into the outfield. Both runners made it home safe, and the Eagles jumped out to an early 2-0 lead.

After one inning, the Eagles have jumped out to a 2-0 lead. With runners on second and third base, and two outs on the board, Troy Freeman drives a line drive into the outfield to bring home Jackson Beach and Harrison Beach. pic.twitter.com/9R5iOy8lxu

Freeman has been catching fire at the plate in recent games; he has now recorded five hits in his last two games. He credits this success to the guidance he has received from the coaching staff throughout the season.

“Coach [Maris] has taught me a lot lately,” Freeman said. “With the mechanics, he’s taught me in the past four weeks, I’ve gotten much better since the beginning [of the season].”

The Eagles survived a scare from the Tigers in the second inning. With only one out in the top half of the inning, Trenton scored off an error from Oak Hall’s outfield. Despite the Tigers also having a man on second base, the Eagles defused the situation with a pair of back-to-back popouts.

The Eagles were unable to respond in the bottom of the second inning, and the Tigers were now within striking distance. However, they would not stay there for long.

After the Eagles kept Trenton off the board in the top of the third inning, things got out of hand fast for the Tigers. At first, they managed to keep the damage from the inning minimal. By the time Oak Hall had picked up two outs, they had only scored a run off of an error from Trenton’s infield.

Nonetheless, the Eagles remained unfazed. With runners on first and second base, Aaron Akins and Jackson Beach were walked in back-to-back plate appearances. After a run scored when Jackson Beach was walked, Harrison Beach drove in a run of his own. A ground ball deep into left field for the latter Beach extended the Eagles’ lead to 5-1.

Kuzmicki then stepped to the plate with the bases still loaded. He proceeded to crack a ball deep into center field that notched him a double and drove in two more runs. After Harrison Beach scored on a passed ball, Freeman proceeded to drive in another two runs with a line drive of his own to center field. By the end of the third inning, Oak Hall’s lead had grown to 10-1.

Oak Hall has taken over! A deep blast into center field from Jack Kuzmicki turns into a 2-RBI double as the Eagles take an 8-1 lead with two outs in the bottom of the third inning. pic.twitter.com/2Ir62dy0RA

Freeman noted that the Eagles felt that they had control over the game as the first inning. The offense was clicking early and the defense helped to keep the Tigers in check.

Eagles Head Coach Kevin Maris singled out Freeman, Kuzmicki and the Beaches as the catalysts of another strong showing for the Eagles. All four players played a key role in the team’s third inning takeover.

“[Troy] hit the ball really well today… They had a good pitcher’s pitch on him that he just poked in there for another base hit. He had an outstanding day,” Maris said. “Both Jackson and Harrison hit it well. … Jack settled into it and relaxed, and he got back to hitting like Jack again… It’s nice to see him get it going.”

Wrapping The Game Up Early (Again)

Freeman kicked off the fourth inning by sitting down three consecutive Tigers batters; all three batters hit popouts to the infield. The Eagles added on to their lead in the bottom of the inning courtesy of another big play from Kuzmicki. Aaron Akins reached first base via a fielder’s choice early inning. Jackson Beach was then walked, and Harrison Beach hit another single, once again loading the bases.

Kuzmicki then ripped another deep ball into center field that rolled all the way to the back wall. While Kuzmicki made his way to second, all three runners sprinted around the bases and made their way home. Oak Hall had now taken a 13-1 lead, putting them in prime position for yet another mercy-rule victory.

At the end of the fourth inning, the Eagles are up 13-1. Another big blast from Kuzmicki drives in three more runs for Oak Hall. pic.twitter.com/ugMw1F2ZJT

Following Monday afternoon’s game, Kuzmicki has a .545 batting average on the year. He currently leads the team in hits (18), doubles (6), triples (4), home runs (2) and RBIs (26). After facing some minor struggles at the plate in the past couple of games, Kuzmicki reestablished himself as Oak Hall’s go-to hitter in situations like these.

“Honestly, I get in my head way too easily. That’s something I’ve been working on,” Kuzmicki said. “These last few games, I’ve been trying to think too much, trying to do too much. Really, I just [needed to] relax, swing well, swing hard and I’ll hit the ball. And sure enough, [I] crushed it.”

Despite the Tigers scoring two runs in the top of the fifth inning, the Eagles grabbed three outs and held on to their double-digit lead. With another mercy rule clinched, the Eagles secured yet another dominant victory to add to their momentum.

Preparing For Whatever The Week Holds

It is currently unclear when the Eagles will play next. They are currently scheduled to host the Branford Buccaneers this Wednesday at 4:15 p.m. However, the status of that matchup is unclear at the moment, and the game may need to be postponed.

If the Eagles do not play on Wednesday, their next game will be on Thursday at 6 PM, when they will face the Bronson Eagles. With Bronson preparing for their senior night, Coach Maris noted some of the connections he has with multiple Bronson players. While he is excited for the festivities, he is also focused on keeping Oak Hall’s momentum going.

Jack Meyer is a first-year student at the University of Florida. He is majoring in Journalism and specializing in Sports and Media.
@jackmeyerespn
Previous Santa Fe Girls Lacrosse Defeats Gainesville in District Semifinal
Next Gainesville Girls Lacrosse Battle for Districts