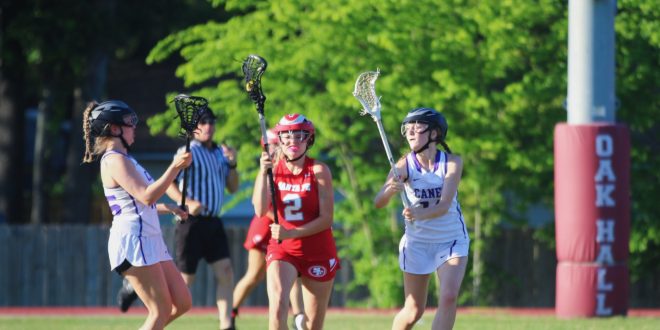 Gainesville High wasted no time finding the back of the net. Senior midfielder Claire Hutton posted two quick goals to give the Canes the lead less than two minutes into the game.

The Raiders found their groove, responding with goals from Alyssa McKnight and Emma Maroon. Shortly after, the Canes took back the lead, thanks to goals from Amy Bush and Avi Lorenzini.

Santa Fe’s Maroon was a force to be reckoned with against the Canes. Just as the Raiders gave up two goals to the Canes, she quickly took control and answered with two more goals of her own.

Maroon finds the back of the net again for the Raiders

Maroon posted a game-high 5 goals against GHS and approached the game with the mentality of putting the team first.

Neither team could pull away throughout the entire first half. Gainesville held onto an 8-7 lead heading into halftime.

To open the second half, the Raiders scored three unanswered goals to take back all of the momentum. McKnight, Maroon and Miranda tallied goals.

Miranda scores off an assist from Morgan

Gainesville’s April Bush responded to break the Canes’ 9-minute scoring drought. Ella Denny followed it up with another goal for the Canes to tie the game 10-10.

The Raiders tapped into a new gear to close out the game against the Canes. The scoring started with a goal from Hallie Morgan with 11:47 left in the second half.

Maroon added another goal of her own to the scoreboard to give the Raiders a two-score lead. Rachel Peters extended the Santa Fe lead even further with another goal.

Celeste Flory attempted to keep Gainesville’s hopes alive with a goal, but it wouldn’t be enough to stop the Raiders. Miranda and Morgan each tallied another goal to secure a 15-11 Santa Fe victory.

Coach Cromwell spoke about her team’s fight in the victory.

The Raiders will compete for the district crown Wednesday night at Oak Hall at 7 p.m. Santa Fe will face Oak Hall, who defeated Eastside 20-0 in the semifinal game.

The last time Santa Fe and Oak Hall faced off this season, the Eagles walked away with a 17-1 victory.