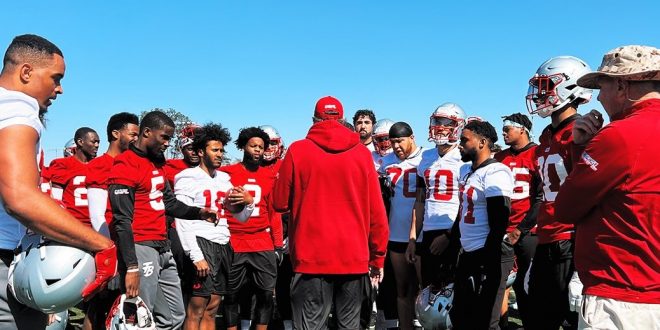 The Tampa Bay Bandits gather around in practice. March 26, 2022 (Via @USFL on Twitter)

The Return of the Tampa Bay Bandits

Bandit Ball is back in action for the first time since 1985 as the USFL returns in their opening weekend. The Tampa Bay Bandits will cap off the opening weekend as they face off with the Pittsburgh Maulers on Sunday, April 17. Kickoff is set for 8 p.m.

The Bandits head into the season as the current sportsbook favorite. Fans of the Bandits have many reasons to be excited. After landing many talented players in the draft, expectations are high for Tampa Bay.

An experienced staff led by Bandit Head Coach Todd Haley looks promising. Haley provides the new Bandits squad with over two decades of NFL experience. Haley served as the former Kansas City Chiefs Head Coach for three seasons, as well as the Offensive Coordinator for the Pittsburgh Steelers from 2012 through 2017.

The Bandits were led by Gator legend, Steve Spurrier during the league’s original run from 1983-1986. Head Coach Spurrier formed one of the leagues most successful teams in Tampa Bay, while amassing a 35-19 record.

Under Spurrier, the Bandits led the league in attendance, proving successful not only on the field but also in the ticket booth. Despite an impressive run, the Bandits disappeared along with the rest of the USFL after play was suspended following the 1985 season.

Tampa is expected to be the best team in the USFL. The Bandits are led by arguably the strongest quarterback in the league, former Ole Miss standout Jordan Ta’amu. Ta’amu has proven to be a dual-threat in the QB position. In addition, he brings with him some experience from the NFL as he bounced around practice squads.

Ta’amu is best known for his XFL stardom. An impressive performance in the XFL in 2020 led to Ta’amu being drafted by the St. Louis Battlehawks as the only one of the first eight XFL passers with zero pro experience. However, he turned out to be the third-best quarterback in the short-lived league. Ta’amu’s 1,050 passing yards was third in the league, and his 217 rushing yards ranked seventh among all players (not just quarterbacks). While most teams in this league are faced with uncertainty for the Quarterback position, Ta’amu is a leader the Bandits know they can count on.

Meanwhile, Kyle Lauletta fills the QB position for the Maulers. Lauletta is a former fourth-round pick who was selected out of Richmond by the New York Giants. However, while Lauletta may have been the first draft pick for the Maulers, Wilson has stated that Josh Love will also be a starter in the QB position throughout the season. Love may have a stronger arm than Lauletta but his ball placement and timing are lacking. Love also proves to be an attacking passer, and will surely challenge Lauletta through the season.

While Haley offers a higher coaching pedigree than any other team in this league, the Maulers are the only USFL team to be led by a first-time head coach. Kirby Wilson is a lifetime running back coach. He has expressed his reliance on running backs Garret Groshek and Madre London. London was honored as the MVP of the European League of Football last season, while Groshek reached moderate success during his time at Wisconsin.

Also worth noting is Maulers running back De’Veon Smith. Smith was undrafted out of Michigan in 2017. Later that year, Smith played with the Dolphins, catching three receptions for 27 yards. Smith had later success as he came in sixth in the AAF with 345 yards while averaging 4.6 yards per carry. Additionally, Smith came in second to Trent Richardson. scoring six touchdowns. Smith transitioned to the XFL, and joined the Vipers to lead the league with 365 rushing yards.

Wilson predicts the Maulers may have the biggest offensive line in the USFL. The offensive line will be led by the guard duo of Vadal Alexander and John Dietzen. On the other side of the line, the Maulers have several possible standouts. These include Wisconsin’s Olive Sagapolu, the powerful inside force that is starting tackle Darrius Moragne, and the 68-game NFL veteran, Ethan Westbrooks.

The Bandits have running back talent of their own as BJ Emmons joins the roster. Emmons’s tenacity added with his pass-blocking prowess, will surely complement Ta’amu’s skilled arm on a Haley team that is expected to throw early and often.

Therefore, the Bandits have focused on the need for pass-blocking linemen to place in front of Ta’amu. The Bandits acquired Juwann Bushell-Beatty and Tyler Catalina for the job. Tampa’s offense is certainly stacked as notable lineman Damien Mama and Bruno Reagan join the squad. Also worth mentioning is Corbin Kaufusi, an outstanding offensive tackle who stands at 6-foot-9. Kaufusi has bounced around practice squads for the Saints, Jets, and 49ers’.

While the Tampa defense does not appear as promising as the offense, there are some stars to look out for. The focus of the Bandit defense will be on Rannell Hall and Quenton Meeks, who look to force many turnovers. Additionally, if the linebackers and edge rushers live up to expectations and former hype, the Bandits will be unstoppable in their quest for the inaugural championship.