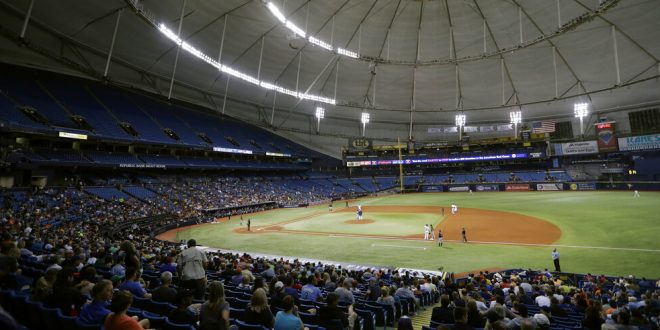 FILE - The Houston Astros play the Texas Rangers during the third inning of a baseball game at Tropicana Field in St. Petersburg, Fla., Aug. 29, 2017. The Tampa Bay Rays’ proposed plan to split the season between Florida and Montreal has been rejected by Major League Baseball. Rays principal owner Stuart Sternberg announced the news on Thursday, Jan. 20, 2022. (AP Photo/Chris O'Meara, File)

The Tampa Bay Rays and Chicago White Sox get ready to match up in their three-game road series this weekend.

Starting April 15, at 7:10 p.m. the rivals begin the first game in their series. The Rays head to the Windy City coming off a loss in their last game against the Athletics 6-3.

We're off to the Windy City pic.twitter.com/drU7iruxvL

The matchup looks to be a close call with the Rays having a slight advantage ranking 4-3 this season while the White Sox are 4-2.

The Rays came out on top last season outscoring the White sox 34-24. In their regular season, the Rays and White Sox tied 3-3. However, the White Sox won the home series 2-1.

For the first time in the 2022 season, these two teams are facing off against teams that made the playoffs.

It’s hard to predict the outcome of the series with both teams making the playoffs last year and being consistent this season.

The MLB is trying to reach a younger audience by partnering with Apple TV+ to watch games live.