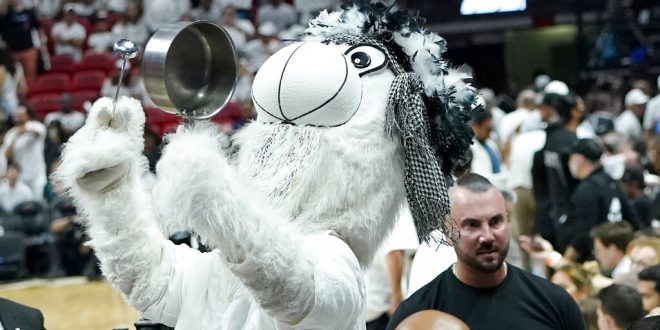 The Miami Heat mascot Burnie bangs on a pot during the second half of Game 1 of an NBA basketball first-round playoff series between the Miami Heat and Atlanta Hawks, Sunday, April 17, 2022, in Miami. The Heat won 115-91. (AP Photo/Lynne Sladky)

The Heat took the victory, 115-91, over the Atlanta Hawks in game one of the Eastern Conference Quarterfinals.

The Hawks scored the first three points of the game. However, the Heat were quick to return the blow. The two teams were practically neck and neck until the 12th point. Once the Heat hit 12 points, the Hawks trailed for the remainder of the game. Miami just continued to extend their lead quarter after quarter.

Duncan Robinson‘s work ethic is unmatched. Robinson went undrafted in the 2018 NBA Draft. Just two years later, he was competing against Lebron James in the 2020 NBA Finals. Now, he is breaking franchise records. In the game one win over Hawks, Robinson set the record for most three’s ever in a playoff game for the Heat. Robinson went 8/9 from three Sunday. He ended the game with a three-point shooting percentage of 88.9% In just 23 minutes on the court, Robinson put up 27 points and one rebound.

Most 3s ever in a HEAT playoff game.

At halftime, the Heat were up 19 points. The Heat came out Blazing hot to start the second half. P.J. Tucker, Heat power forward, opened up the half with back-to-back threes for the Heat.

Miami essentially dominated the second half. After a knock-down three from P.J. Tucker and an and-one layup from Jimmy Butler, they were up 73-48 with just under five-and-a-half minutes in the third quarter. At the start of the fourth quarter, Trae Young and the Hawks were down 26 points. Although Atlanta was able to outscore Miami in the fourth, 31-29, the efforts were not enough to pull off a comeback.

Star Performances for the Heat

Star Performances for the Hawks

Game two of the best of seven game series will take place Tuesday at 7:30 p.m. Miami leads the series 1-0.