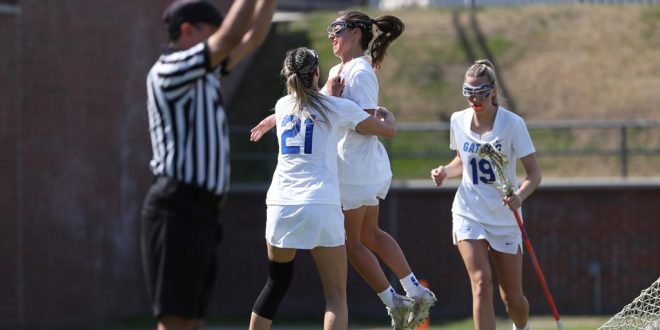 The Florida Gators lacrosse team took care of business on Sunday in the NCAA Tournament, soundly defeating No. 17 Jacksonville 15-10.

Having won 15 straight games at a record of 17-4, Gators lacrosse has advanced to their seventh NCAA Quarterfinal in the program’s thirteen-year history. The seventh-seeded Gators will take on the No. 2 Maryland Terrapins on Thursday at noon.

Sophomore Danielle Pavinelli, who leads the team in goals and points, led the attack once again with a team-high five goals. That is the second-highest amount of goals scored by an individual player in a NCAA Tournament game in program history. Pavinelli also became the 15th Gator to surpass the 100 goal career goal mark.

Freshman Josie Hahn had the best performance of her young career, netting a career-high three goals. Two goals a piece were contributed by Paisley Eagan, Maggi Hall and Emma LoPinto. Additionally, Bella Palagonia brought in a goal of her own to finish out the Gators scorers.

Goalkeeper Sarah Reznick continued to be the backbone of this Gators team. Reznick made 12 total saves with a save percentage of .545. The reigning AAC Goalkeeper of the Year’s brilliance has been a direct link to the Gators’ superb season.

A Date With the Terps

After playing all three of their NCAA Tournament contests at home, the Gators will now travel to College Park, Maryland to face the Terrapins.

One of the Gators’ four losses this season came at the hands of Maryland. Back on February 28, Florida had no answers for the Terps in what was a lopsided 18-8 contest in favor of Maryland.

Just like the previous matchup between the two, Maryland will once again have home-field advantage. This will be the toughest test yet for the Gators, but if they want to advance to the Semifinals they must remain resilient and continue to have their offensive attack and goaltending on full display.

Gators Lacrosse continues to steamroll through their opponents. Florida beat the No.3 team in the …