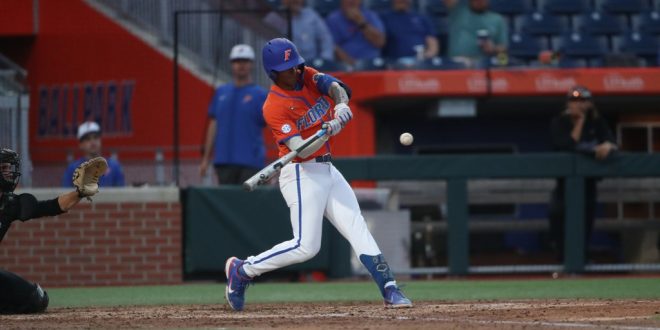 The Gators continue their hot streak with a series win over Missouri this past weekend. This improved the Gators’ record to 32-19 on the season.

Gators Start the Series Off Right

The series took place on Missouri’s home field, which posed an extra challenge for the Gators’ streak to continue. After allowing a home run in the first inning, UF already had some catching up to do.  However, this was no problem for them: the Gators went on to score 13 consecutive runs and finished the match with a score of 13-1. Although the Gators went down a run early, they had 10 hits in the game while holding the Tigers to just three.

After six straight wins, including a statement win over Missouri the prior day, the Gators fell 5-3 to the Tigers on Saturday. This was an all-around disappointing loss for the Gators, as it snapped their 16-game win streak against Mizzou. One positive takeaway from the game was the strong performance from Florida catcher BT Riopelle. Riopelle collected two hits to go along with three RBIs on the day.

Back on Track in Game Three

After an uncharacteristic loss to the Tigers on Saturday, the Gators finished the series on top. UF was victorious on Sunday by a score of 4-3. This win was led by the Gators’ first baseman Kris Armstrong, who helped Florida gain a lead in the sixth inning.

Armstrong finished the rubber match with three hits, two RBIs, and a run to help get the Gators back on course.

Florida will look to continue their hot streak after winning seven of their last eight games. Their next matchup is tomorrow night at home against FSU. After losing to the Seminoles earlier this season, the Gators will have to continue this momentum if they are going to beat Florida State. Coverage of the rivalry match begins at 6:55 p.m. tomorrow.