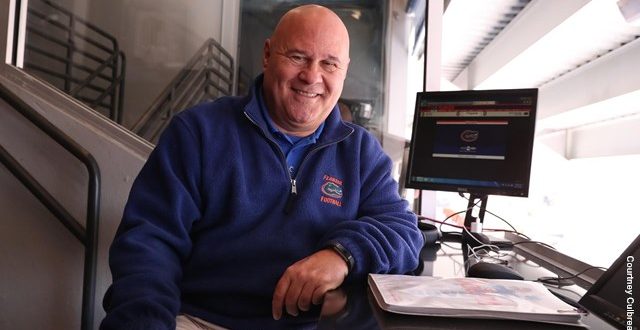 Photo courtesy of the Florida Gators

Take in hearing Mick Hubert shout “Oh My!” while you can. As the Gators have a new head coach in both football and men’s basketball coming in, a new voice will be coming in too.

After 33 years, Mick Hubert will be hanging up the headset. According to Florida Gators senior writer Scott Carter, Hubert will wrap up his career with the upcoming Gators baseball home series against South Carolina.

The Voice of the Florida Gators

The Gators hired Mick Hubert on May 4, 1989, after serving as the sports director at CBS affiliate WHIO in Dayton, Ohio for 10 years. During his time at Dayton, Hubert called games for the University of Dayton’s football and men’s basketball teams.

Hubert called every Florida football game dating back to the 1989 home opener. For every rivalry week, SEC game and national championship, Mick was on the mic.

Along with the 419 football games, Hubert called over 2,000 games throughout the Gators sports world, including over 1,000 in men’s basketball and baseball each. He called nearly every men’s basketball game as well. The only time he didn’t was if he was calling football.

Hubert will spend his retirement with his wife, Judi, at their home in Sarasota. They have sold their Gainesville home and will be bound for the west coast of Florida next week.

One of the games that catapulted Mick into the hearts of Gator fans was his call of Chris Doering’s touchdown reception from Danny Wuerffel against Kentucky. Florida won the game on the TD. The winning streak against Kentucky stayed alive and would eventually reach 31 straight.

Then, there’s the call for when the Gators did the unthinkable. They won a football and men’s basketball national title in less than 12 months. Both were against Ohio State.

Both programs head into new seasons aiming to get back to their winning ways. But this time, when they do, it’ll be a new voice in the booth yelling “oh my.”

Harrison is a sports coordinator at ESPN 98.1 FM/850 AM WRUF. He served as a beat writer for Florida Gators football for the 2019 and 2020 seasons. He also contributes to WRUF's Gainesville Sports Center segments and makes appearances on the Clash on Harp on Sports. Harrison has been a content writer for WRUF since January 2019 as well.
@HarrisonSmaj
Previous Florida Gators v. Maryland Terrapins NCAA Lacrosse Championship Second Round Matchup
Next Gators Golf to the NCAA Tournament