The Gators Men’s Basketball squad looks in good shape, with tons of new talent joining the team. The Gators have only one scholarship remaining for the 2022-23 season. With all the others being given to players currently a part of the squad. New commit Riley Kugel from Dr.Phillips Highschool in Orlando is currently ranked the No.48 overall prospect and the No.4 shooting guard prospect in the class of 2022 by 24/7 sports. The 6-foot-5, 185-pound guard will be a great addition to the team and a key offensive player.

Kugel was initially committed to Mississippi State University. When MSU’s coach Ben Howland left the program, he was released from his commitment letter. Now a Gator basketball staffer Korey McCray, the initial and lead recruiter for MSU regarding Kugel, was on the case of getting him back. With his chemistry with fellow gator signee Denzel Aberdeen, they were former teammates in high school.

Florida was not the only team pushing for Kugel, though. With high-end programs like LSU and Georgia in late conversations trying to sign Kugel. However, Kugel’s history with McCray and the University of Florida being close to home could have significantly influenced his decision.

Other recruits, such as hard-commit Denzel Aberdeen, also from Dr.Phillips High school, are good looks for the squad. Aberdeen, a 6-foot-4 175-pound combo guard who committed back in November, will mesh well with Kugel.

In the way of transfers, the Gators have four new players on their way to becoming gators. First off is Kyle Lofton, a 6-foot-4 180-pound point guard from St.Bonaventure University in Hamlet, New York. Another point guard Trey Bonham is transferring from Virginia Military Institute. Bonham is 6 feet tall and 170-pounds. Another combo guard named Will Richard, a 6-foot-5 195-pound transfer from Belmont University in Nashville, Tennesee. Lastly, a much-needed forward, 6-foot-8 175-pound small forward transferring from LSU. 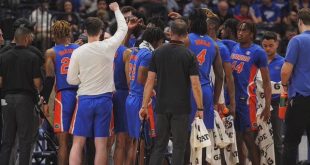 In a crushing overtime defeat, the Florida men’s basketball team heads back home after just …