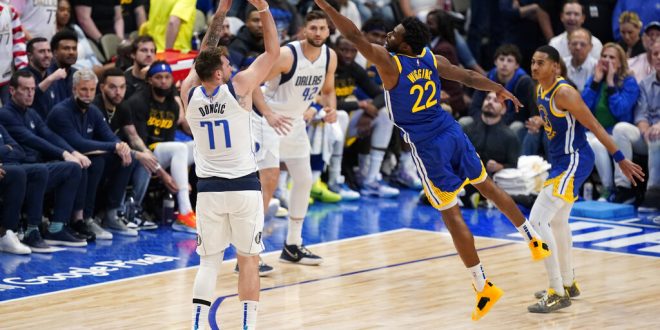 Warriors Look to Finish off Mavs

The Dallas Mavericks face elimination when they play the Golden State Warriors tonight in game five at 9 p.m. ET. The Mavericks, down 3-1 right now, look to carry on their stellar shooting from game four into tonight’s matchup.

Backs against the wall

The Mavs will aim to continue their pursuit of the impossible in trying to come back from a 3-0 deficit.

Luka Dončić has led the charge for the Mavs so far in this series averaging 33 PPG, 6.0 APG and 9.3 RPG. Jalen Brunson has also had a significant impact on this series with 20 PPG, 4.3 APG and 5.3 RPG.

While Luka Dončić has been incredible when facing elimination this playoffs, it will be an arduous task beating the Warriors at home. The Warriors are a leagues best 8-0 at home, these playoffs.

The Mavs are 3-0 while facing elimination in the playoffs this year,  two of which from beating the Suns in emphatic fashion.

"Have the same physicality, get the next W."

The Golden State Warriors have shown that they are not going away any time soon.

The roster has the perfect mix of veterans and young up-and-coming players, making the Warriors primed for another dynastic run.

Stephen Curry has spearheaded the Warrior’s fluid offense by having 26 PPG and shooting a spectacular 47% from three during this series.

The Warriors have had a surprise major contributor in this series in Andrew Wiggins. Wiggins has had a massive impact on this series on both ends of the court by averaging 18.8 PPG, 3.1 APG, and 6.5 RPG and has also been the primary defender on Luka Dončić.

The core of the Warriors have been here before and look to close out the series and advance to the finals for the sixth time in eight years.

When Wiggins has played well in this series, the Warriors have won, so if Wiggins has another outstanding performance, the Mavericks may be in trouble.

The role players for the Mavs will decide whether they win tonight or go home packing.

In the first three games of the series, the Mavs shot 33% from three, proving to be insufficient.

In contrast, in the Mavs game four win, the team shot 46% from three and 30 pts from Luka Dončić.