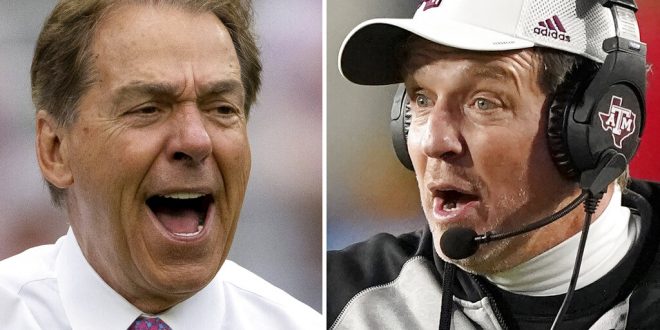 FILE - At left, Alabama head coach Nick Saban yells to the sideline during the first half of Alabama's NCAA college football scrimmage, Saturday, April 16, 2022, in Tuscaloosa, Ala. At right, Texas A&M coach Jimbo Fisher reacts to an official's call during the second half of the team's NCAA college football game against Mississippi, Saturday, Nov. 13, 2021, in Oxford, Miss. Texas A&M coach Jimbo Fisher called Nick Saban a “narcissist” Thursday, May 19, 2022. after the Alabama coach made “despicable” comments about the Aggies using name, image and likeness deals to land their top-ranked recruiting classes. Saban called out Texas A&M on Wednesday night for “buying” players. (AP Photo/File)

This week, SEC meetings are being conducted in Destin, FL. One of the biggest topics that people have been focused on is the tension between head coaches Nick Saban and Jimbo Fisher.

Earlier this month, Saban made a statement and said that Texas A&M “bought all of its players.” This is what caused all of the uproars.

While this may be true, according to Paul Finebaum, the two head coaches were never really fans of each other.

The seating chart was much anticipated by viewers. Once it came out, it showed that all of the coaches were seated in alphabetical order. However, Saban and Fisher were the exceptions to this. Fisher was seated between all of the SEC officials, far from Saban. Many people speculated that this was done in order to keep the peace during the meeting. The real reason for this is that Fisher is the chair of the football coaches group.

Even though people believe that these two coaches are often butting heads, Saban stated that he has no problem with Fisher.

Focus of This Year’s Meetings

For the coaches, the main focus of this year’s SEC meeting is figuring out if the conference will stick with the eight-game season or switch to nine. While this might seem like an easy switch, it is much more complicated than that.

If the SEC coaches decide to do this, they will have to change to a 3-6 model. Three permanent games and the other six will rotate over the course of a player’s career.

Some teams want to keep the eight-game model because nine games raise their chances of losing another game and not making it to a bowl game.