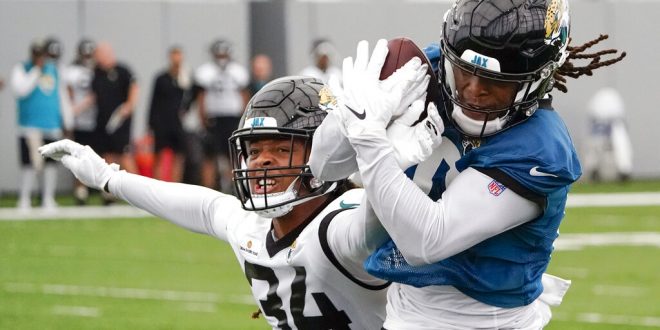 Out of all offseason Organized Team Activities in the NFL, the Jaguars are a team to keep an eye on. They have a team with a young core, consisting of two straight first-overall picks in Trevor Lawrence and Travon Walker, and a brand-new head coach in Doug Pederson. These OTAs give us a good glimpse into how this team will be set up this upcoming season.

A number of recent first-round selections were on display during these OTAs.

All eyes were on Clemson duo Trevor Lawrence and Travis Etienne. As rookies, they were not expected to turn Jacksonville into a contender right away, but the pressure is on for the two to show improvement from last year’s performances.

When it comes to Lawrence, the sophomore quarterback looked a lot more comfortable and confident. He showed off his deep-passing strengths and connected with receivers in tight windows.

Etienne’s situation is more complicated. The running back missed last season after getting injured in the preseason. This is his time to show the Jaguars and the NFL the talent that he has. However, Etienne didn’t miss a beat, showing his great speed and catching ability.

The Jaguars also drafted a promising defensive unit in the first round. They drafted Georgia defensive end Travon Walker first overall and inside linebacker Devin Lloyd out of Utah at the 27th selection this past April. There is still a lot to be seen from Walker after the Jags rookie minicamp, but Lloyd has been notable in OTAs, coming up big against the first-team offense.

Doug Pederson mentioned that he is excited about the combination of youth and veteran presence on their defense.

The Jaguars picked up players in the free-agent market that can be key targets for Trevor Lawrence.

Former New York Giants tight end Evan Engram joins Doug Pederson’s squad in Duval County. He has not done anything significant in the OTAs as of yet, but keep an eye on him, as he is a big piece in how the Jaguar offense will be set up this season.

The Jaguars also brought in former Arizona Cardinals second-round pick Christian Kirk. The wide receiver got a big payday, but it is looking to be worth it for Jacksonville as he is showing good chemistry with Trevor Lawrence.

Former Raiders wideout Zay Jones also looked good in OTAs. The 2017 second-round pick caught a number of passes from Lawrence and looked to also have good chemistry with the quarterback. Add in 2020 second-round pick Laviska Shenault, who had a solid showing in the OTAs as well, and Lawrence is looking like he has a lot of great weapons.

Protecting their quarterback of the future is crucial for the Jaguars’ short-term and long-term success. Starting right tackle is a big question mark for this team, and the Jags are taking a good look at all of their options.

Former Gator Jawaan Taylor and 2021 second-round selection Walker Little are both getting looks at right tackle.

With Cam Robinson absent from OTAs due to travel issues, Taylor and Little both took turns being slotted at left and right tackle.

The Jaguars are deep with corners. Veteran Shaquill Griffin leads the pack, but others are impressing in OTAs who can compete for playing time.

Xavier Crawford and rookie Gregory Junior both made impressive plays, coming up with an interception each. Last year’s cornerback group could not force many turnovers. In 2021, only three interceptions were made by corners. However, Jacksonville has a much more promising set of defensive backs.

This Jaguars team is not one that is expected to fight for a playoff spot just yet, but it is one that is expected to make some significant progress from last year. This is a team that has a good future if everything goes right. For now, these OTAs show that this roster is gelling well with new head coach Doug Pederson at the helm.