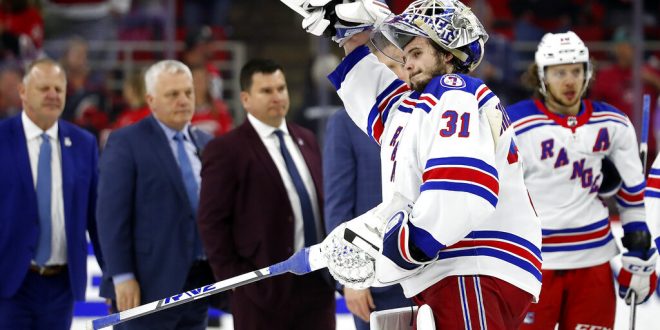 In what will be their third straight Eastern Conference Final appearance, the Tampa Bay Lightning will face a familiar foe in the New York Rangers.

The Lightning and Rangers previously met in the 2015 Conference Final but will face off once again with a trip to the Stanley Cup Final on the line.

Ever since the Lightning defeated the Rangers in seven games seven years ago, much has changed. Tampa Bay has won two Stanley Cups in three total Finals appearances, while the Rangers underwent a complete rebuild.

Tampa’s core of Steven Stamkos, Nikita Kucherov, Victor Hedman, and Andrei Vasilevskiy remains intact from the 2015 team. Vasilevskiy, who backed up Ben Bishop in 2015, has sprung to prominence as one of the NHL’s best goaltenders.

Only one player remains from the 2015 Rangers team that reached the ECF in Chris Kreider. Everyone else, including franchise icon Henrik Lundqvist, has since moved on.

After missing the playoffs for the past five seasons, the Rangers have rebuilt a solid cast. The additions of Mika Zibanejad, Artemi Panarin, Adam Fox, Jacob Trouba, and Igor Shesterkin have put New York back on the map in the quest for their first Stanley Cup victory since 1994.

Lightning head coach Jon Cooper cited these major changes as a reason the past ECF meeting between the two teams does not matter for him.

How They Both Got Here

In the first round of the Stanley Cup Playoffs, Tampa survived a bruising seven-game series against the Toronto Maple Leafs. They soon stunned the hockey world by sweeping the Presidents’ Trophy-winning Florida Panthers in the second round.

Even without playoff darling Brayden Point, the Lightning’s championship pedigree was on full display against the Panthers. Vasilevskiy was exceptional in net, limiting Florida to a total of three goals across all four games. This is astonishing considering the Panthers led the league in scoring during the regular season and had the record for most goals scored in a season in the salary cap era.

The Rangers reached the ECF in very unlikely fashion. The Blueshirts overcame a 3-1 series deficit in round one to defeat the Pittsburgh Penguins in seven games. This was followed by a 2-0 deficit against the Carolina Hurricanes in round two. New York once again beat the odds and clinched the series in seven.

The Rangers have home-ice advantage, but the Lightning are the favorites to win this series; with most hockey experts agreeing.

This series is sure to be an epic goaltending battle, as Vasilevskiy goes head-to-head with Vezina Trophy favorite Igor Shesterkin.

After facing the likes of Casey DeSmith, Louis Domingue, an injured Tristan Jarry, Antti Raanta, and Pyotr Kochetkov, the Rangers will finally face a star netminder in Vasilevskiy.

Not only will the Rangers need to slip the puck past Vasilevskiy, but they’ll also have to keep up with Tampa’s star-studded top line winged by Stamkos and Kucherov. And not to mention Tampa’s defensive line led by the powerful Hedman and former Rangers captain Ryan McDonagh.

If there’s anything that can help to propel New York to the Stanley Cup Final, it’s that they’ve had their backs against the wall before. They experienced firsthand that the team has no quit in them. The veteran core of Kreider, Panarin, and Zibanejad will need to play like the best version of themselves. Additionally, Shesterkin will have to stand on top of his head for a Rangers team whose defense could wilt against a high-powered Tampa Bay offense.

At the beginning of the playoffs, Rangers head coach Gerard Gallant believed any team in the Eastern Conference could hoist the Cup. As Game 1 nears puck drop, he still holds true to that notion.

Brayden Point (lower-body injury) is uncertain to suit up for Game 1. He did skate at the end of Wednesday’s optional morning skate for the Lightning. However, the Lightning can still easily win this series as long as their star players continue to play the way they have.

Anything can happen in this epic Eastern Conference Final rematch. Game 1 will take place at Madison Square Garden Wednesday at 8:00 p.m. with coverage on ESPN.